However, Amazon (AMZN) is one of those “strong stocks getting stronger” that did just make a new 52-week and all-time high this morning.

If you’re a casual observer, it might be surprising that any stock could be making new all-time highs after the Brexit volatility(NTSEARCA:VXX).

Let’s chart it and highlight the pattern and potential pathway into the future. 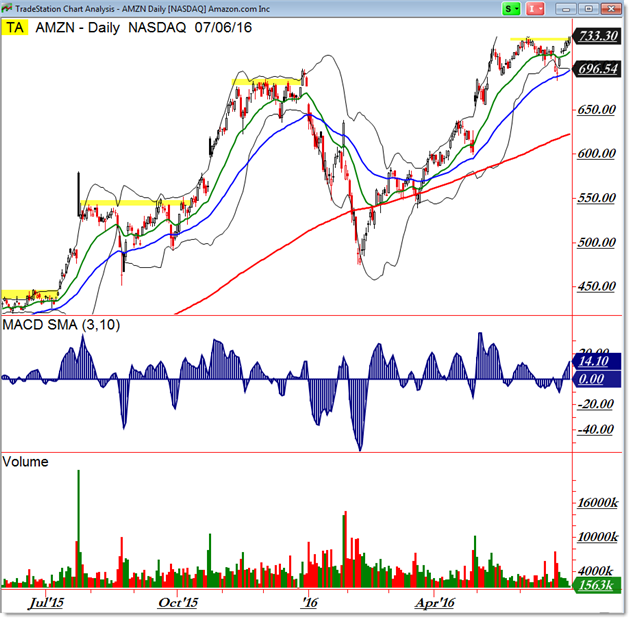 We’re seeing a strong stock get stronger which is one of our core investing (trading) philosophies.

Rather than try to find the reversal point in a downtrending stock, you’ll often do much better to buy strong stocks on retracements (pullbacks) or even breakouts.

We’re seeing a new breakout in Amazon (AMZN) this morning beyond the $730.00 per share level.

I’m highlighting three prior breakouts in Amazon (in 2015) and we can see that two breakouts led to strong rallies… and one certainly did not.

The “failed” breakout or “Bull Trap” that triggered into January 2016 resulted in a collapse in share prices.

However, buyers regained the upper hand and reversed the trend at the $500 per share level.

In a relatively volatile stock market, especially following the Brexit, we should turn our attention to stocks with relative strength – those making new highs after the Brexit “retracement.”

Amazon is one of those names – continue following the price action at the $730 level and be ready to trade a bullish continuation (breakout) though be aware that a Bull Trap (January 2016) is a risk of playing aggressive breakout strategies.