Amazon’s newest best seller is you and me, the customers. And the company is banking billions of dollars a month by selling us to the highest bidder.

Just in time for Black Friday shopping madness, Amazon(NASDAQ:AMZN) has a brand-new best-selling product. Its sales numbers have been growing by leaps and bounds the past few years.

Amazon’s newest best seller is you and me, the customers. And the company is banking billions of dollars a month by selling us to the highest bidder.

It’s probably no secret to you that Facebook and Google have made mountains of cash selling our personal information. The websites track our activity, and the companies sell that data to companies who want to sell us their stuff.

Few, however, would think a company that made its name selling stuff would be involved in the same racket. But that’s exactly the case.

And Amazon is selling us far better and faster than either Google or Facebook.

But when you break it down by quarter, the growth is even more impressive. In the quarter that ended on March 31, 2017, Amazon raked in a solid $850 million from ad sales. 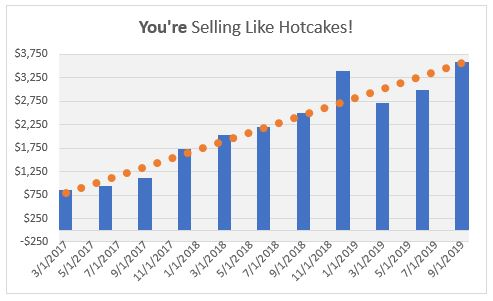 Last quarter, that number had shot up to about $3.6 billion. That’s 322% growth. And if that growth rate holds in the last quarter of 2019, Amazon stands to pull in more in one quarter than it did in the entire year of 2017.

That adds up to well over $24 billion Jeff Bezos has cashed out over less than three years. And all that money came in because he’s OK with selling you and me. Not just selling things to you and me, but actually selling us.

Gunning for Number One

Now, Facebook and Google still have a duopoly on digital advertising. The two companies control the first and second spots. And Amazon comes in a distant fourth after Alibaba (which comes in a distant third). But that could all change very quickly.

You see, none of the other companies can match Amazon’s growth. Facebook’s ad revenues are expected to grow about 26% this year. Google is looking at maybe hitting 17% growth.

But Amazon’s been averaging 86% annual growth the past two years. And even if that slows and only hits analyst targets, it’s still a whopping 33% expansion.

At that rate, it won’t take Amazon long to pick up the number three spot from Alibaba. And after it hits that milestone, Facebook will be the next to fall. Then, eventually, even Google will be playing second fiddle to Amazon’s dominance.

And that presents an opportunity for patient investors…

Back in the late 1990s, Amazon was just an idea. It was operated out of a converted garage and had the company name spray-painted on the wall. 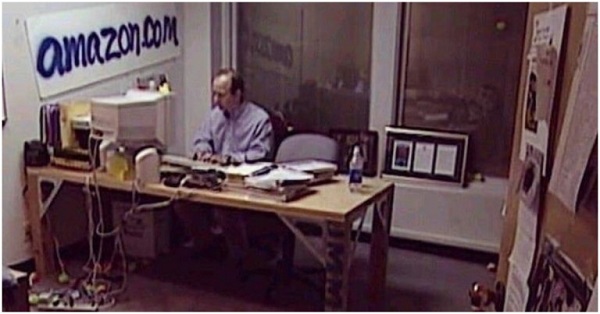 That doesn’t really look like a trillion-dollar company to me. But it did become just that. And patient investors were repaid handsomely for the gumption to stick it out.

But if you’re looking for a way to cash in on Amazon’s dominance and you don’t want to wait two decades to benefit, keep reading. Because I’ve got the perfect strategy for you…

Add an Extra Earner to Your Household

There are lots of people out there offering you the chance to get something for nothing. But in the real world, you usually only get back what you put in. If nothing goes in, nothing comes out.

But in some instances, you really can get something for doing pretty much nothing. And this is one of those:

With only a couple minutes’ worth of work, you can set yourself up to earn as much as $48,000 extra each year. And you only have to do the work once to ensure that you keep getting the money forever.

It’s money Amazon must pay to keep its operations running smoothly. And a portion of that money gets set aside for payments to individuals like you every day.

You don’t have to use Amazon’s platform, own a single share of Amazon stock, or even shop online at all.

Members of my investing community, The Wealth Advisory, are already cashing in. This year, they’ve already split total payments worth over $976 MILLION.

And the biggest one of the year is about to be announced. It’ll bring our annual total up to nearly $1.5 BILLION in extra income.

No Time to Wait

I’m talking about life-changing money right here. An extra few thousand bucks a month when you average it out over a year sounds pretty nice. And when you add it up and see you could be getting payouts worth $48,000 a year or more, you can see how this might change the way you live.

And it’s certainly enough to change your nightmares about running out of cash in retirement into dreams of how you’ll enjoy your golden years.

So take a break from today’s madness and check out this presentation my colleague and I put together. It’ll give you all the details on this incredible opportunity.

Once you’re done watching, you’ll be all ready to set yourself up for a lifetime of steady (and growing) payouts courtesy of Jeff Bezos and Amazon.com.

If you’d prefer a written report about the opportunity, I’ve got one of those for you too. Just click here and you can read it.

Just make sure you act now. December 13 seems like it’s pretty far away. But next week is the start of December. And we all know how busy that month can be.

Before you know it, you’ll be surrounded by piles of discarded wrapping paper and wondering how you missed yet another opportunity to change your financial future.

So while you’ve got a break from work today, take a minute and get yourself set up to enjoy a lifetime of extra income. You won’t regret it when it comes time to start cashing those checks.