After the surprise US Election outcome, we’re seeing a flood of money into Financials, presumably on the expectation the new Republican administration will ease regulation and provide tax cuts that a Democratic administration would not have provided.

Whatever the logic, the reality is that funds have flooded into Financials, crashing the sector to the upside.

Here’s the XLF ETF(NYSEARCA:XLF) and we’ll take a moment to look at individual components next: 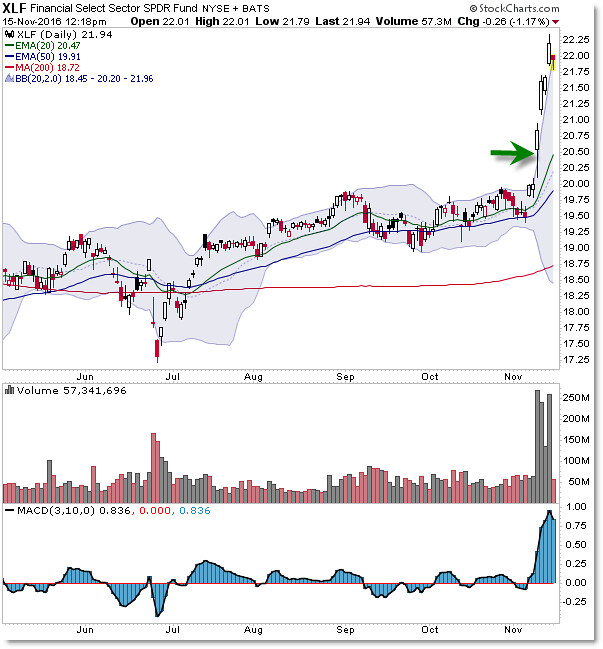 The XLF tracks financial/bank stocks and is a popular index to track the health of the broader financial industry.

After a dip and reversal low in June, shares resumed the larger uptrend of higher highs and higher lows amid a rising moving average (how we define uptrends).

With the surprise election outcome, shares surged on Wednesday and traded higher every day… until now.

First, it’s an important lesson in how politics and markets intersect, often with explosive results.

Second, it’s a chance to profit from surprise outcomes.

Here’s the lead-up and surge in a few of the big financial stocks: 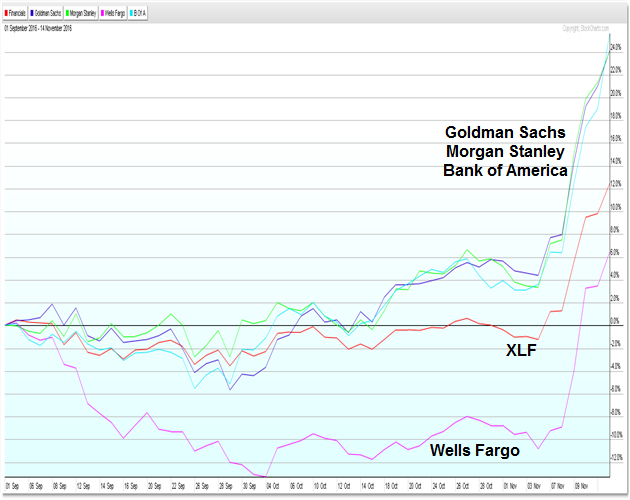 I’m starting this percentage chart on September 1st and tracking through November 15th, 2016.

We know that Wells Fargo came under investor pressure (selling) due to their fraud allegations in September.

What’s striking is again the surge after the election in ALL stocks, Wells Fargo (WFC) included.

Markets – and stocks – are forward-looking vehicles.  They price in all available information about the future.  Price – buying and selling pressure – is a result of these complex calculations and assumptions.

The message is clear – “the market” (Wall Street/Funds, etc) expects financial companies to benefit from the new administration.

While we may see a pullback or retracement against the post-election surge, continue following this sector and the new money flow into this key sector of the market and economy.