For intraday and short-term traders, the recent week has been abnormally more “gappy and trappy” than normal.

What do I mean and what can we do about it?  Let’s take a look at the intraday chart: 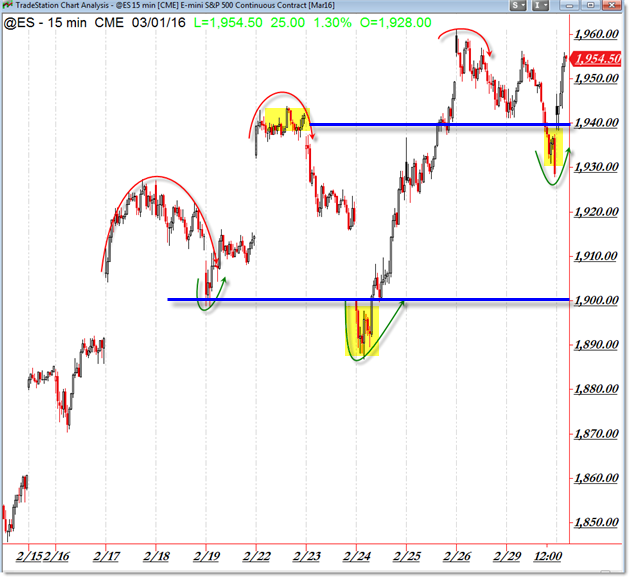 Here we see the simple @ES Futures on the 15-min intraday chart.

I’ve been repeatedly highlighting these levels – and trading plans – to members along the way.

Markets are either stable or unstable, flat or volatile.

We’ve moved into an environment of short-term instability, characterized by “Gaps and Traps” recently.

A gap is a large supply/demand imbalance that occurs overnight, or before the opening bell.

It’s when price rapidly moves higher or lower (on the open) from the prior close.

A “Trap” occurs when price initially breaks through a key level – for example, under 1,900 – and then rapidly trades back through it (like on February 24th).

The recent environment has been more prone to these tricky events lately, as seen above.

Generally, a trap is a frustrating event that skilled, nimble traders can parlay into a quick profitable win.

Usually when price initially “probes” through a level but reverses back through it, it leads to a sustained swing away from the “trap” level.

This is due in large part due to stop-losses (of the losing side) triggering.

As you plan and trade the beginning of March, just know that we’re in an unusually “Gappy and Trappy” environment.