For years I have been preparing my subscribers for the new electric era and a dramatic shift from oil to lithium.

In this Seeking Alpha article from early 2014 entitled, “Are Lithium-Ion Batteries Becoming The Fuel Of The Future?”, I wrote, “This Tesla gigafactory could be a major catalyst and astute investors should begin to realize that the internal combustion engine which replaced the horse may now become increasingly replaced with lithium-ion batteries over the next 3-5 years.”

Many investors are asking why natural gas(NYSEARCA:UNG), oil (NYSEARCA:USO) and coal (NYSEARCA:KOL) is crashing while lithium is soaring?  The answer may be is that smart money is beginning to grow fearful of global warming and climate change.  They may sense even leading up to the Paris Climate Agreement that big money would get behind the clean energy (NYSEARCA:XLE) sector. 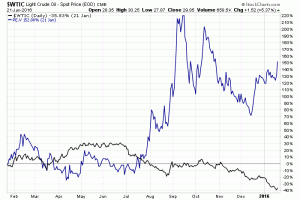 According to recent Washington Post article, 2015 was a breakout year for clean energy investments with over $325 billion invested into the sector.  What is shocking about this figure is that it happened during a year when oil crashed from above $100 per barrel to 10 year lows.  Why are lithium stocks soaring and renewable energy demand increasing when oil is so cheap?

Could this be the beginning of once in a generation shift from a fossil fuel based economy to a renewable one?

The major demand for clean energy appears to be coming from emerging economies such as China and India where they have seen the decline in air quality from fossil fuel based power plants.

Right now I am invested in the rare earth sector which is critical for permanent magnets used in wind turbines.  I also like lithium and graphite as the power storage sector goes hand in hand with renewable sources such as wind and solar.  Uranium is still cheap despite all this capital coming in for clean energy.  Nuclear Power is critical to reduce carbon emissions and demand for high grade projects will grow rapidly over the next decade.

Although I am bearish on equities, I believe one area where we could see great relative strength and demand is in clean energy.  It could be one of the few safe havens.  The Paris Climate Agreement could possibly stimulate even more investment as the market realizes that the governments will be supportive of clean energy development. 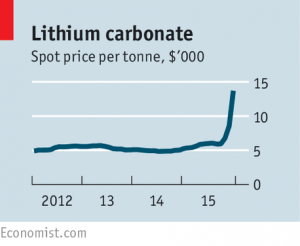 The US is concerned about employment numbers.  Looking for a good job in a growth area?  Maybe you should see how to get into clean energy.  Expect to see more states move away from fossil fuels over the next decade and fund projects that will transition to use renewables and nuclear.

(I own shares and companies are either current of past advertisers on my website and individual small cap stocks are high risk!)

3) Western Lithium (WLC.TO or WLCDF) Could Supply Shortfall with Two Of The Top Lithium Assets

“Lithium is booming yet our blue chip Western Lithium is more than 50% cheaper than the approximately $8 million CAD bought deal financing it did with Dundee and Haywood back in June 2015.  The terms of that financing was $.70 CAD per unit with a $.90 CAD two year 1/2 warrant.  Its even significantly cheaper than the $5 million at $.54264 private placement with Bangchak Petroleum.  I believe that attempts will be made over the next two years to hopefully exercise those warrants in the money as it moves closer to commercial production in Argentina.  It is nice as a shareholder to have POSCO putting up the money.”

“With the permit amendment in place, the Company remains on track to begin production at the Facility in the first quarter of 2016. The re-commissioning of the Facility has already provided an economic benefit for local contractors who were active participants in the plant refurbishment process. The plant is expected to benefit the local community on an ongoing basis by providing approximately 3 direct full-time jobs and has the potential to ultimately provide two or three times that number, depending on the level of production required from the Facility. Beyond that, Great Lakes Graphite is committed to becoming an integral member of the local community.”

“Following extensive evaluation and highly targeted staking, Fission 3.0 has further enhanced its already-strong exploration portfolio in the Athabasca Basin region. Our award-winning technical team is also making good progress with early-stage exploration work on a number of the company’s high-priority projects as we explore for near-surface uranium mineralization in the world’s leading high-grade uranium district.”