One way that people miss the big picture on inflation is by ignoring asset prices.

Jimmy McMillan founded the Rent Is Too Damn High Party in 2005 to contest the New York City mayoral election that year, garnering 4,111 votes.

Given the way things are going, McMillan should add “College and Doctor’s Bills” to his party’s name.

He’s likely to find a much bigger constituency in the coming years.

Here’s why: Despite constant news headlines about low inflation, low unemployment and slowly rising wages, the single most important story about the U.S. consumer is almost entirely ignored.

Digging deeper into that story reveals opportunities for long-term profit … if you position yourself now.

When you read the U.S. financial press as diligently as I do, a big bias jumps out.

If stock prices are rising, all is well. End of story.

But stock prices aren’t the only thing that matters to a smart investor. There’s also the critical question of who’s going to be able to buy all the stuff the latest hot technology(NYSEARCA:XLK) company is making.

Given trends in U.S. consumer expenditures, that’s one of the most important questions you should be considering right now.

INFLATION: IT’S NOT JUST ABOUT GROCERIES AND GAS

As an economist by training, it’s frustrating to see people misinterpret price statistics.

Then again, those statistics are deliberately designed to conceal as much as they reveal.

One way that people miss the big picture on inflation is by ignoring asset prices.

Sure, we haven’t seen much everyday consumer price inflation over the last decade of the Federal Reserve’s money printing. But asset prices have skyrocketed — just look at the stock market! They’ve gone up big-time.

That’s because most of the money pumped out by “quantitative easing” has gone to big financial institutions and wealthy households, who use it to bid up stock prices.

But an even more critical blind spot is the dramatically rising prices of the things households buy irregularly. Those prices are rising much faster than incomes, and they’re killing the U.S. consumer.

ESSENTIAL COSTS ARE OUT OF CONTROL

Over the last decade, household income has risen 15%. But the price of housing has risen by 26%.

The price of higher education has risen three times as fast as household income! 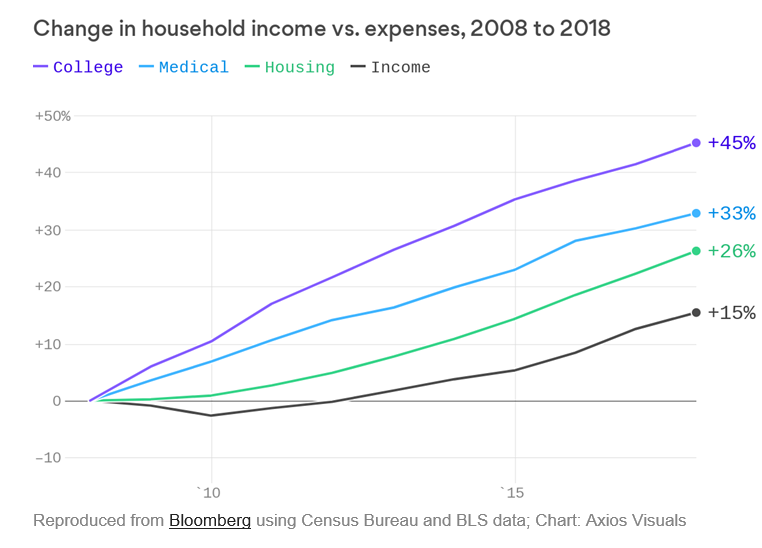 Of the three, housing prices are the only one that can be explained in terms of supply and demand.

Housing prices rose rapidly from a low base in the aftermath of the 2008 financial crisis.

On top of that, the supply of housing entering the market has been far too low for the last decade (which creates a massive opportunity for profit, as I explain in the December issue of The Bauman Letter.)

Millennial households looking to buy their first home are driving up prices.

You’re probably aware that U.S. health care (NYSEARCA:XLH)costs are out of control. That’s not about supply and demand at all.

A combination of monopoly pricing by ever-expanding hospital groups, massive inefficiencies in the health insurance sector and price gouging by pharmaceutical companies ensures that U.S. households pay more for health care than any other developed country.

The rise in higher education costs is nothing short of scandalous.

It’s caused almost entirely by the dramatic rise in student lending. Thanks to lax regulation and lobbying by the for-profit education sector, student loans are issued at such a volume that they drive up the prices colleges can charge for tuition.

The bottom line is that the two biggest drivers of household expenditure in the U.S. today are the result of rigged markets. They’re deliberately exploited to extract money from the pockets of the middle class.

If the U.S. economy wasn’t so distorted by monopoly market structures and lobbying, the average U.S. household would have a lot more income to spend on essentials. But it is, so to make ends meet, U.S. households turn to debt.

Since bottoming out in the second quarter of 2013, U.S. household debt has risen steadily, recently surpassing the peak it set in the third quarter of 2008, to the relief of most U.S. consumers.

As the chart below shows, the main drivers of this increase are mortgages, auto loans and student loans: 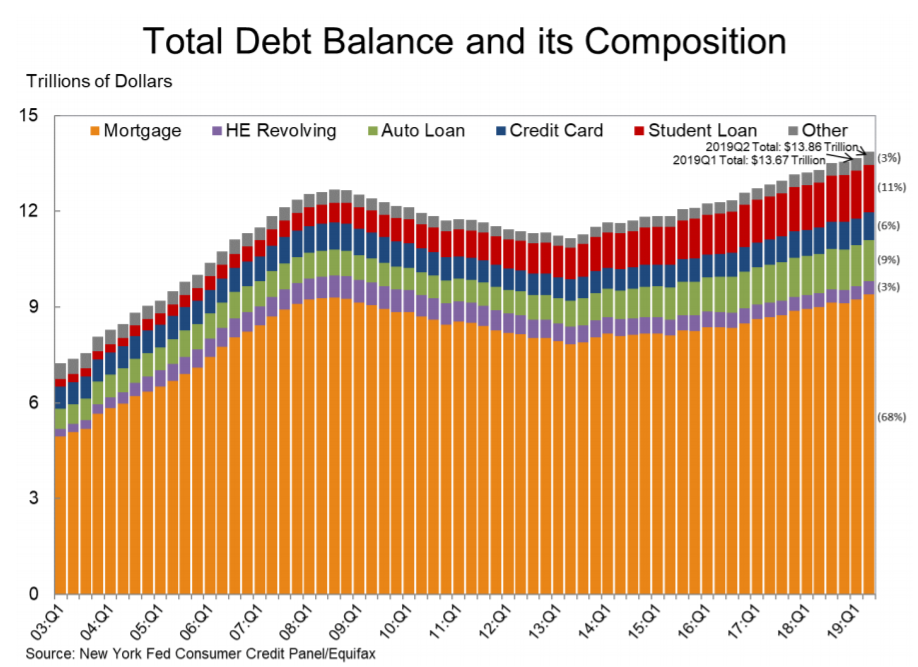 The rise in auto loan debt is due to three factors:

Credit card debt has also expanded significantly. That’s to be expected, given the huge rise in education and medical costs. People must pay for it somehow. 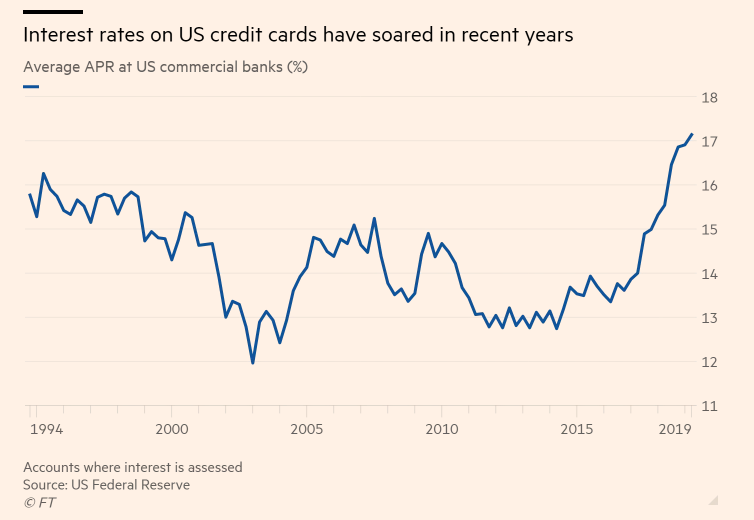 Adding it all together, we have:

WHEN EVERYTHING’S TOO DAMN HIGH, SOMETHING’S GOTTA GIVE

I’ve long maintained that the biggest threat to long-term U.S. economic prosperity is the fact that so much of our household incomes are siphoned off by rigged prices and astronomically high interest rates on the U.S. consumer loans and credit cards people use to try to make ends meet.

In an economy like that, millions of households are effectively serfs under a system of economic feudalism. Most of any increase in income they receive is siphoned off before they can use it.

When the next economic downturn comes, this big income squeeze is going to leave households unable to purchase discretionary goods such as cars, appliances and electronics. Most of their income is going to have to go to their debt obligations — and to the bare necessities of life.

But every dark cloud has a silver lining.

The companies that sell those bare necessities are going to do well. That’s why my stock recommendation of the week is the Consumer Staples Select Sector SPDR Fund (NYSE: XLP).

After all, money comes and money goes, but everyone’s got to eat.