From the press release:

The number of job openings decreased to 7.0 million on the last business day of September, the U.S. Bureau of Labor Statistics reported today. Over the month, hires and separations were both little
changed at 5.7 million. Within separations, the quits rate was unchanged at 2.4 percent and the layoffs and discharges rate was little changed at 1.1 percent. This release includes estimates of the number and rate of job openings, hires, and separations for the nonfarm sector by industry and by four geographic regions.

The first chart below shows four of the headline components of the overall series, which the BLS began tracking in December 2000. The time frame is quite limited compared to the main BLS data series in the monthly employment report, many of which go back to 1948, and the enormously popular Nonfarm Employment (PAYEMS) series goes back to 1939. Nevertheless, there are some clear JOLTS correlations with the most recent business cycle trends.

The chart below shows the monthly data points four of the JOLTS series. They are quite volatile, hence the inclusion of six-month moving averages to help identify the trends. For the three years, the moving average for openings has been above the hires levels as seen in the chart below. 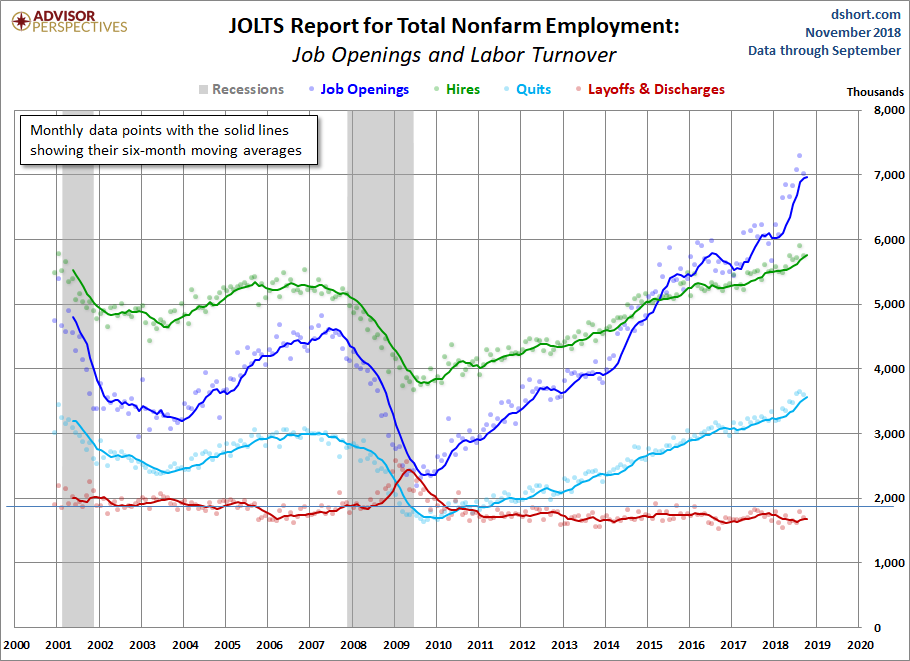 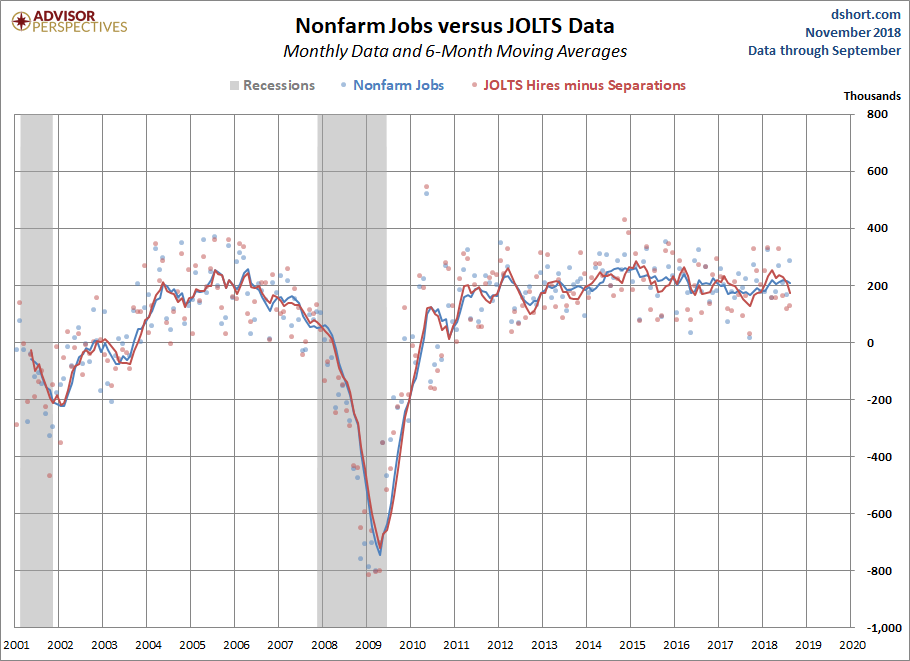 A Population-Adjusted Perspective on JOLTS

The chart above is based on the actual numbers in the JOLTS report. A better way to view the numbers is as a percent of Nonfarm Employment, which essentially gives us a population-adjusted version of the data. Here is that adjustment for four of the JOLTS series. Note that the vertical axis for each is optimized for the high-low range to facilitate an understanding of the individual trends. 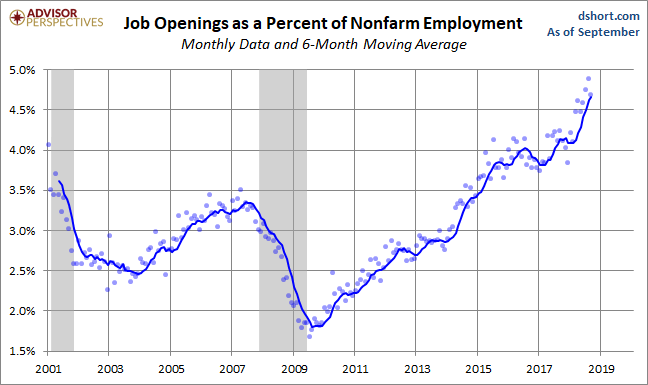 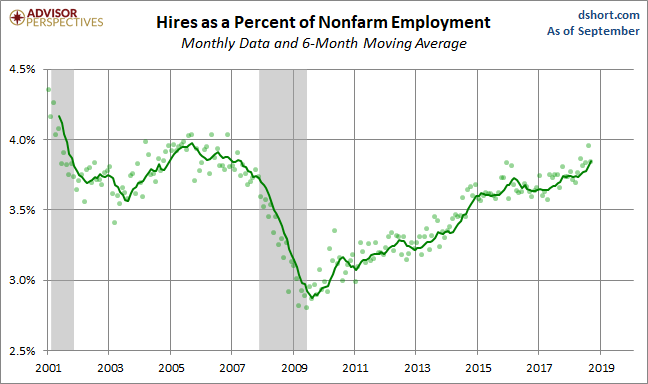 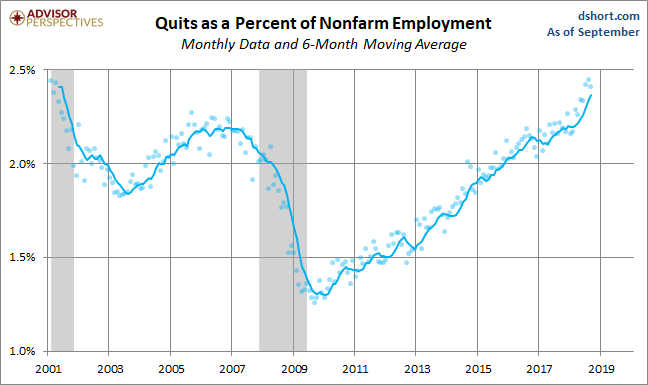 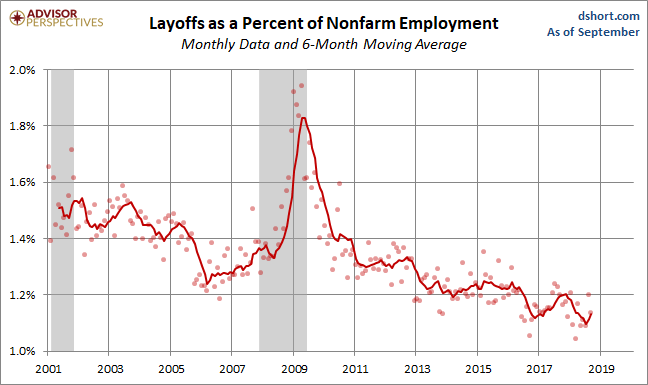 Where Are We Now in the Business Cycle?

Based on the six-month moving averages, we can see that:

The Trend in Quits

To reiterate a previous point: Increases in Quits suggest employment flexibility. Quits tend to be inversely correlated with Layoffs & Discharges, which are associated with business cycle weakness. Following the last recession, Quits began increasing in 2010, and the rate accelerated in 2013. The trend leveled out in 2015 but then resumed the upward trend later in the year and continues through 2017. Layoffs & Discharges saw a downtick in the later months of 2016, leveled out in the early months of 2017, with an uptick later in the year. 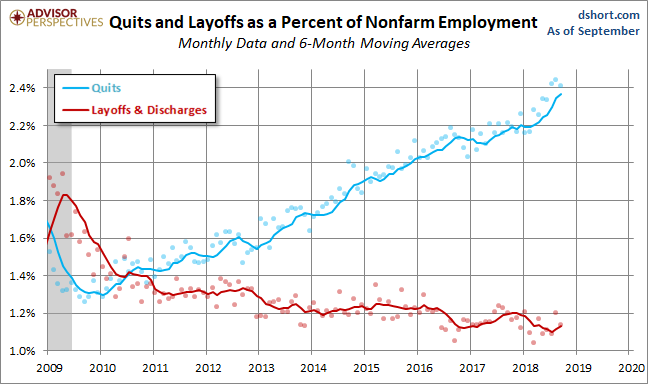 It would, of course, be excellent if we had historical JOLTS data stretching back through several business cycles. But alas we do not.

The JOLTS reports will be interesting to watch in the months ahead. But the volatility of the data, which is also subject to revisions, encourages caution in taking the data for any given month very seriously.