In March of 2013 during the depths of the bear market in junior gold miners I wrote to my subscribers featuring a new unknown company NuLegacy Gold (NUG.V or NULGF) which no one knew about as it had not been covered by other writers or investment banks at the time to my knowledge.

I wrote more than three years ago.  ”Many juniors do not have what this company offers.  A management team with a track record of exploration success, a partner like Barrick and exploration in mining-friendly Nevada next to Barrick’s Goldrush Deposit….”

Now 40 months later the junior miner announces in this week’s news release, “We are very encouraged by the results from Hole AV-02…This is the second Carlin-type gold system we have confirmed on the property. It is at the same depth as Barrick Gold’s multi-million ounce Goldrush deposit just 9 km to the northwest”.  The company is now a retail and institutional favorite making long term readers observe gains of 400%+.

Since I first wrote about NuLegacy in March of 2013, this junior has soared more than 400% while the Junior Gold Miners(NYSEARCA:GDXJ) Index is still way below 2013 levels.  This demonstrates the importance of sticking to the top management teams that have a track record of success and the creation of value that arises from a new discovery. 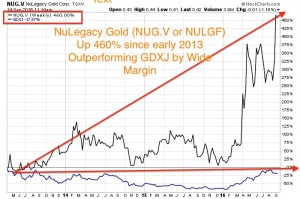 The secret of wealth is buying wholesale during bear markets and waiting for bull markets to eventually sell to the irrationally exuberant momentum players at ridiculous retail levels.  For many of my readers this is 3+ years of waiting but after 400% gains it may have been worth the wait although there is still lots of room for growth in the form of a takeout.

Many pundits love gold (NYSEARCA:GLD) now, but be careful as those very same talking heads were some of the people short gold last year.  The reward goes to the ones like my readers who find the discarded junior mining gems during the bear market and wait until the bull market in gold returns to take profit.   The times to have been accumulating junior gold miners was during the bear market especially near the end when the Venture was hitting all time lows.  Now investors should look to pullbacks to the upward trend like the 50 and 200 day moving average to add or initiate positions.

During the bear market although the odds are against you its still possible to find the big winners by finding quality assets in mining friendly jurisdictions led by top technical teams.  Look for sales and discounts on these juniors in the form of pullbacks and corrections.  Avoid chasing them higher during breakouts.

Look at this new featured company in Quebec which I just highlighted last week that is now pulling back to its upward trend and 50 Day Moving Average. It has all the making of a triple or quadruple like NuLegacy with similar features such as great management with an exciting asset.  The team has a successful track record running juniors as well as working with the producers such as Placer Dome.  They own an asset in Quebec, a jurisdiction which is getting a lot of interest after the value created by Osisko and another formerly featured company Integra Gold (ICG.V or ICGQF).  I believe this little junior with top management has the potential to grow a major resource in Quebec and hit high grade gold when they start drilling.  The share structure is still extremely tight with less that 60 million shares fully diluted.  I expect for this company to have some trenching results by October with a drilling program to begin in 2017.  By that time this company should be well known throughout the junior mining sector.

One of our favorites in 2016 has been Sandspring Resources (SSP.V or SSPXF) as it owns 100% of one of the largest marquis mines in the World in Guyana, a jurisdiction which relies on mining and where there have been some success stories such as Guyana Goldfields (GUY.TO)  Guyana is a $9 stock in production and that could be the price where Sandspring is one day once they publish a Feasibility Study, Finance and Construct the mine and start production.  This is a long way away from the price it currently trades around $.70 CAD.  Sandspring is actually the most oversold its been since the beginning of its rally in 2016 falling below the 50 Day Moving Average.  These are the high quality stories that should be looked at when there is some profit taking.  The stock has had an amazing run so pullbacks are normal and healthy in a new secular bull market in gold.  I think gold could make a run to push through $1400 to possibly $1550 by the 1st quarter of 2017.  This price rise could definitely make Sandspring’s huge asset that much more valuable especially as we head towards a production shortfall by the major producers in 2018.  Remember there are very few assets worldwide which could produce 200k ounces plus annually and has 5+ million ounces of gold like Sandspring. Sandspring’s pullback is quite restorative as many investors may have been waiting for a pullback to take an initial or secondary position in this highly leveraged to gold price play.

However, I wouldn’t be surprised that in this new gold exploration environment if Sandspring looks to make additional discoveries or acquire some top notch properties in Guyana that have been left behind by other distressed juniors.  You always have to look at the people behind the company especially strategic partners such as Silver Wheaton and insiders such as Mining Entrepreneur Frank Giustra who has one of the top track records in the mining business.  I am optimistic that this could be one of the premier gold districts for a major producer in the coming years.