This commentary has been updated to include this morning’s release of Nonfarm Employment. March’s 196K increase in total nonfarm payrolls had revisions that resulted in 14K more jobs than previously reported. 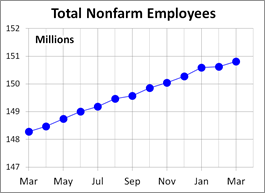 This commentary has been updated to include this morning’s release of Nonfarm Employment. March’s 196K increase in total nonfarm payrolls had revisions that resulted in 14K more jobs than previously reported. The Investing.com consensus was for 175K new jobs and the unemployment rate to remain at 3.8%.

The chart below shows the monthly percent change in this indicator since the turn of the century, a period that includes two recessions. We’ve included a 12-month moving average to help visualize the trend. 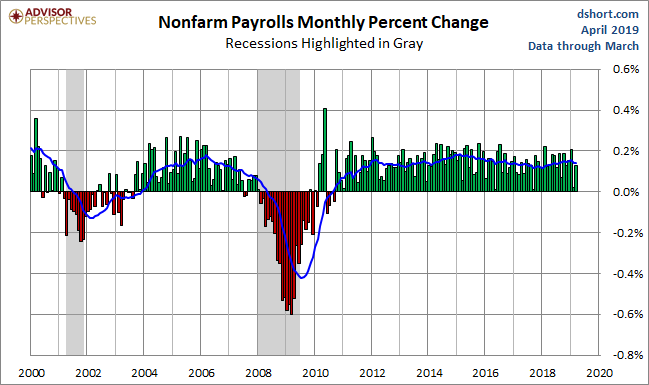 The Problem of Revisions

At first glance, this indicator appears to have a strong correlation with the business cycle. However, there is a major problem with this assumption: The data in this survey of business establishments undergo multiple revisions. The initial monthly estimate is subject to a first and second revision, subsequent benchmark revisions and annual revisions that stretch back many years (the most recent includes revisions back as far as February 1990). The cumulative size of the revisions is quite stunning, much of which is owing to the “hindsight” of those annual revisions.

The chart below measures the size of the revisions from the initial estimate to the latest employment report. 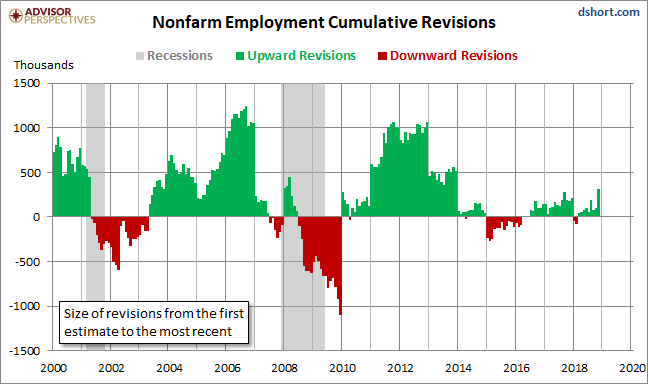 The Problem of Population Growth

Another problem with the Nonfarm Employment data is that it isn’t adjusted for population growth, which reduces its usefulness in illustrating secular trends. The chart below incorporates a population adjustment by dividing the Nonfarm Employment (FRED series PAYEMS) by the Civilian Labor Force Age 16 and Over (FRED series CLF16OV). We’ve added a couple of trend lines and a callout — not to suggest a forecast but rather to highlight the potential impact of a near-term business-cycle downturn. Note also that the current level is about where we were during the 2001 recession. 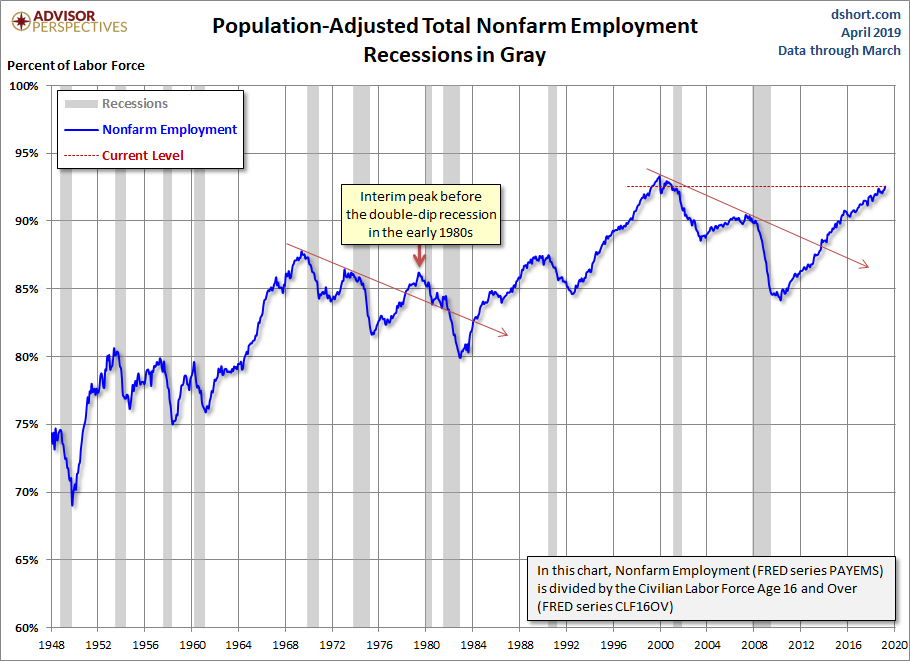 The chart and table below illustrate the performance of the generic Big Four with an overlay of a simple average of the four since the end of the Great Recession. The data points show the cumulative percent change from a zero starting point for June 2009. 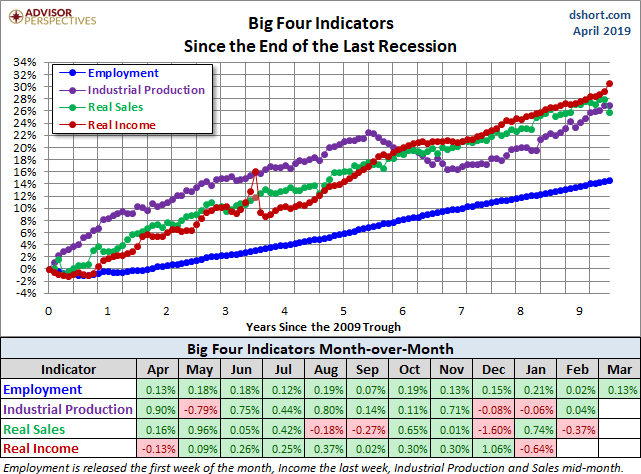 The US economy has been slow in recovering from the Great Recession, and the overall picture has been a mixed bag. Employment and Income have been relatively strong. Real Retail Sales have been rising but below trend. Industrial Production has been slow to recover and has finally been showing signs of improvement.

Here is a percent-off-high chart based on an average of the Big Four. The average of the four set a new all-time high in November, previously set in October. 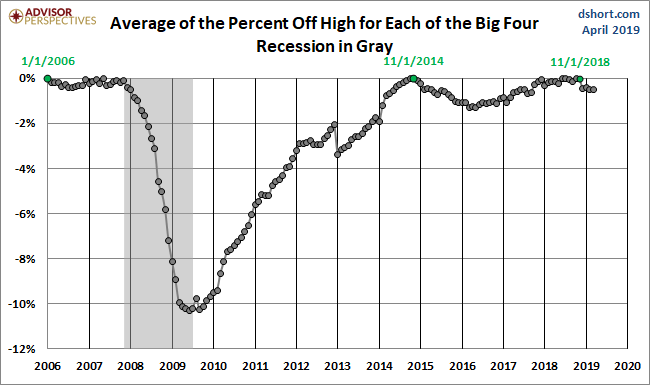 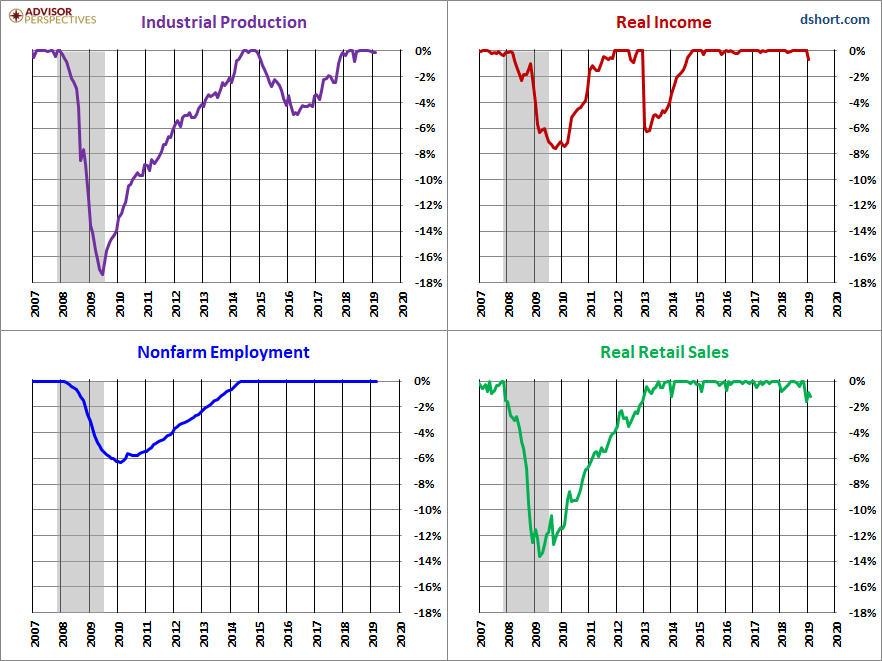 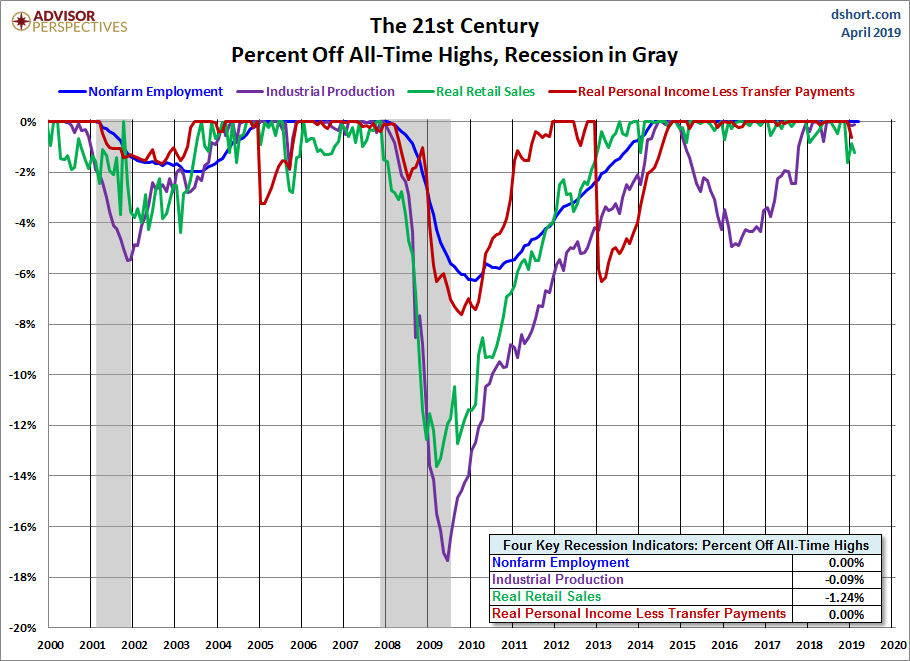 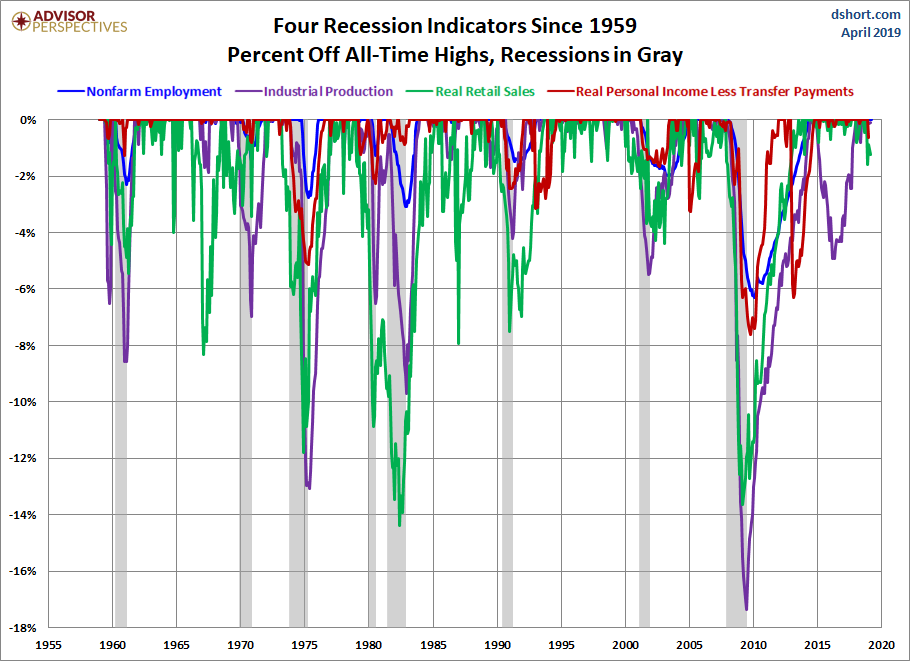 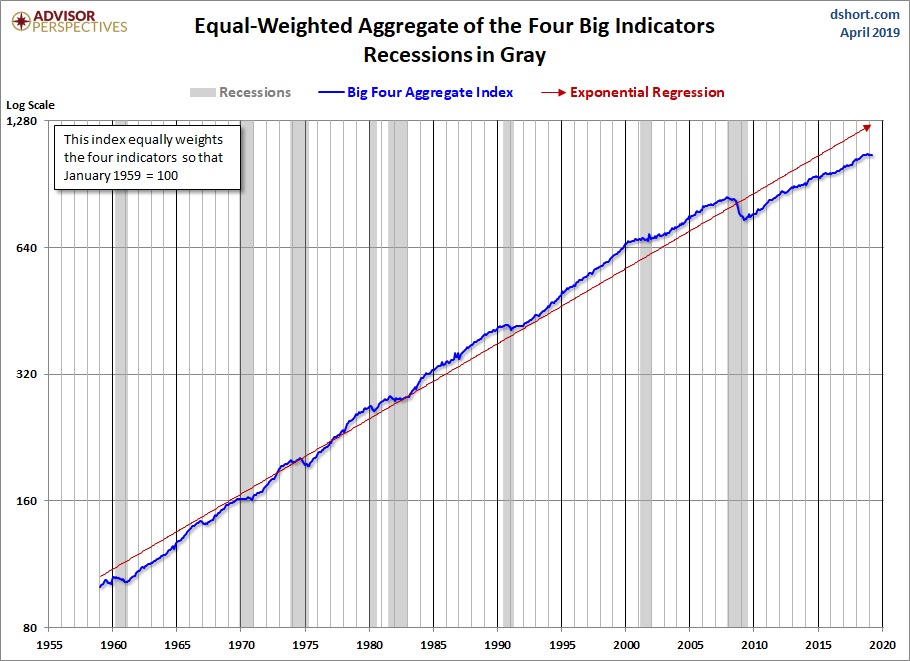 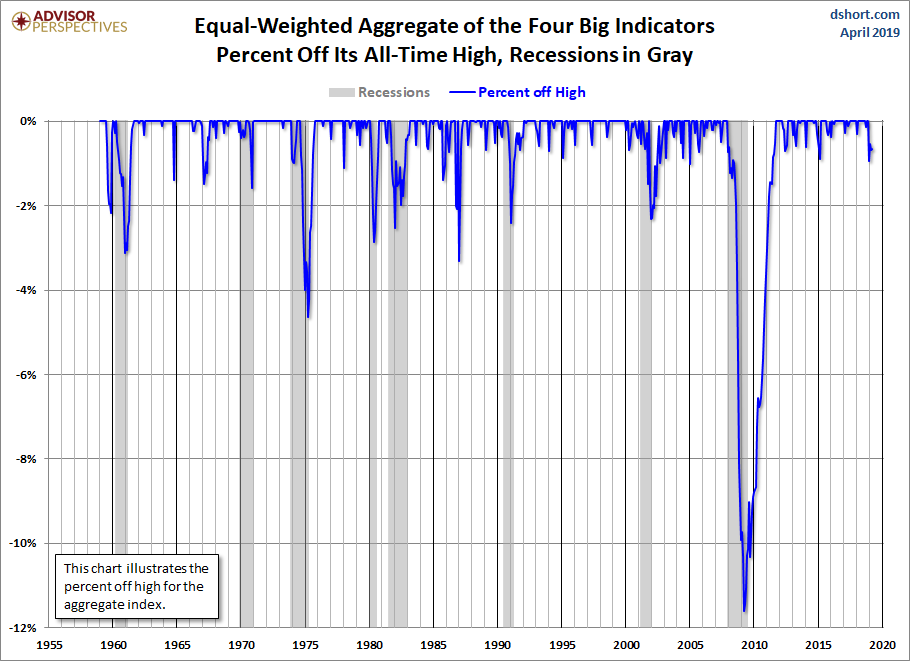 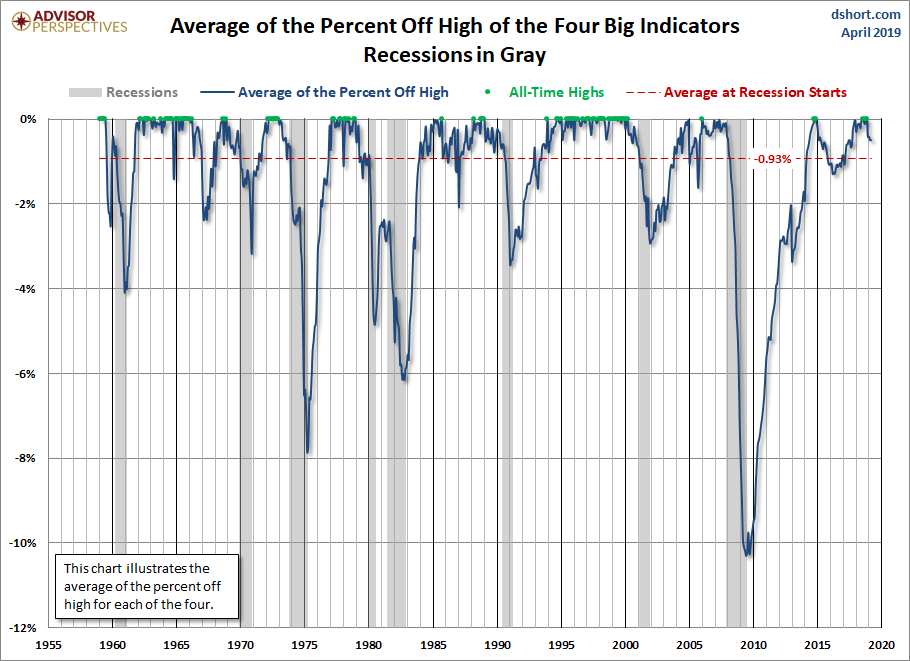 There are many ways to plot employment. The one referenced by the Federal Reserve researchers as one of the NBER indicators is Total Nonfarm Employees (PAYEMS). 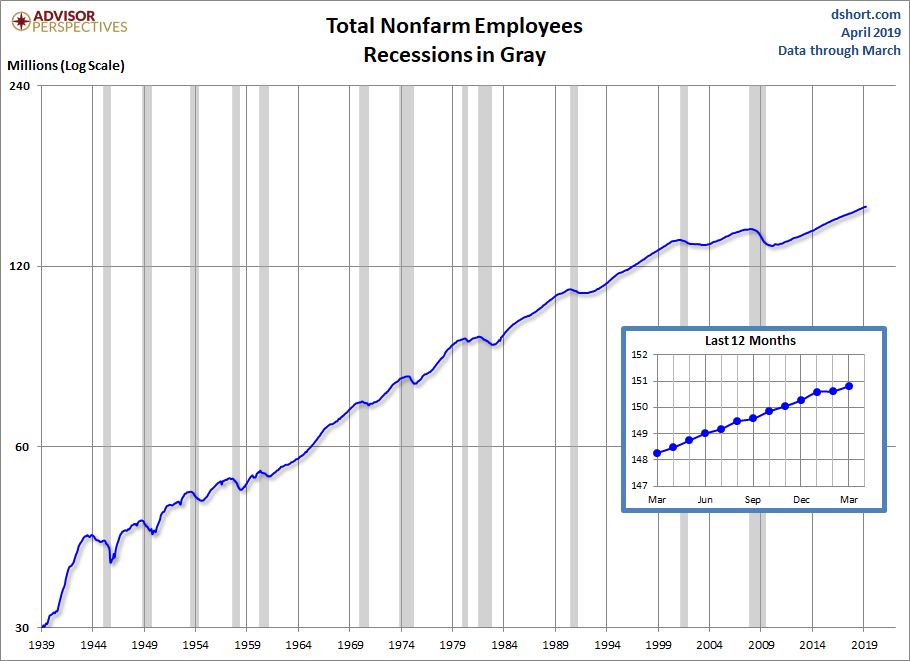 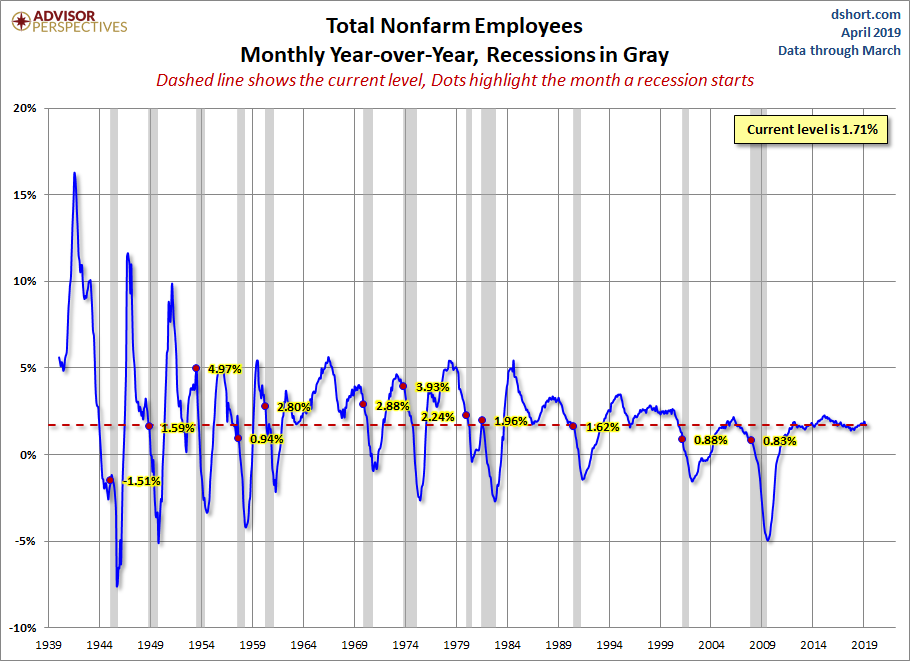 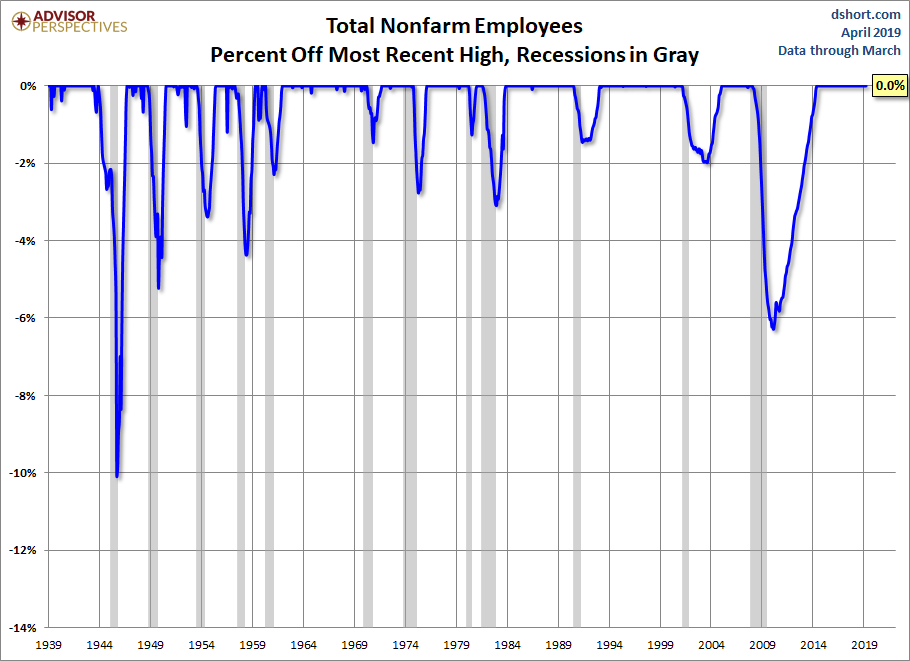 A Note on Recessions: Recessions are represented as the peak month through the month preceding the trough to highlight the recessions in the charts above. For example, the NBER dates the last cycle peak as December 2007, the trough as June 2009 and a duration of 18 months. The “Peak through the Period preceding the Trough” series is the one FRED uses in its monthly charts, as explained in the FRED FAQs illustrated in this Industrial Production chart.