Despite better than expected earnings per share and revenue, Netflix (NFLX) stock collapsed overnight into this morning with an “Oops” Breakout Pattern.

Let’s chart our “Oops Breakout” and plot the current levels on which to focus in NFLX: 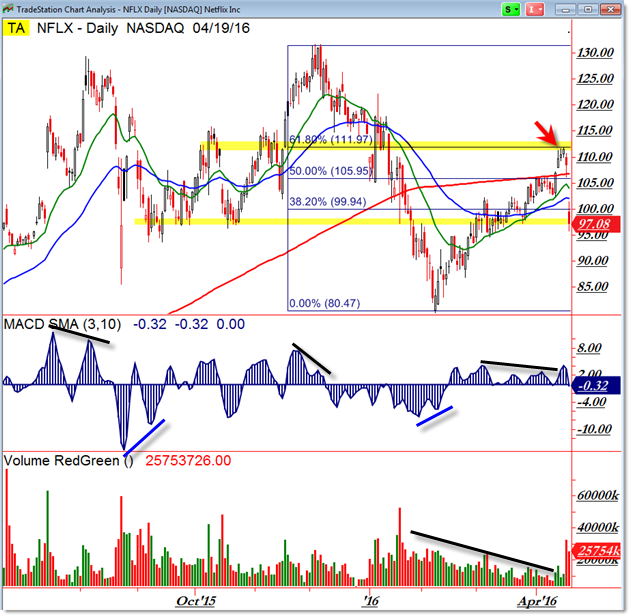 We’ll see it clearer in the next chart but on the indicator-overlay chart, we see Netflix (NASDAQ:NFLX) rallying with negative divergences into resistance at $112.00 per share.

It’s the 61.8% Fibonacci Retracement and price target as highlighted.

Buyers were unable to generate enthusiasm and break price higher above resistance.

Yesterday’s gap-down and bearish day on an otherwise short-squeezed bullish market was a sign that not all is well with this high-flying popular stock.

Ultimately earnings were strong but future guidance was weak and investors responded by liquidating positions.

Price is now gapping and trading down in a sudden breakout/breakdown into Open Air under $100.00. 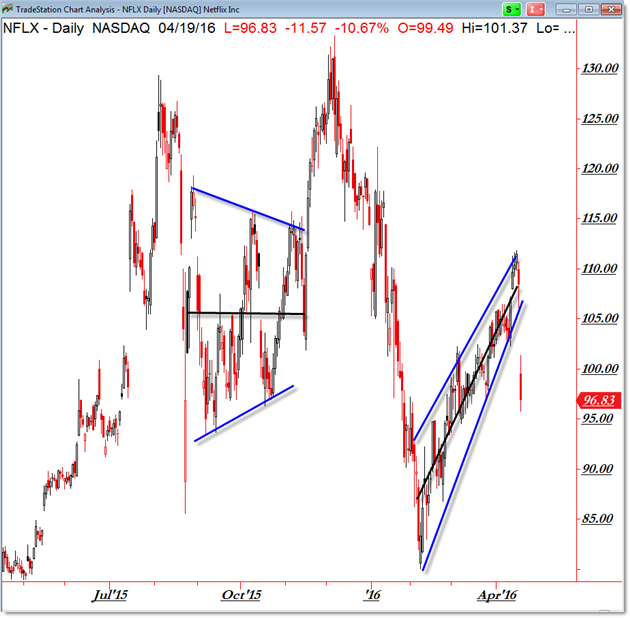 Netflix (NFLX) is actually a gappy, volatile stock but it’s popular to trade due to the familiarity and high volatility.

We see frequent gaps and impulse (sustained) swings in both directions as shown.

A triangle breakout in late 2015 resulted in a bullish impulse to new highs above $130 but price has traded sharply down away from that level as shares began 2016 on an extremely weak (bearish) note.

What we’ll now know as a “Bear Flag” or “Dead Cat Bounce” (highlighted) terminated today with the impulsive breakout away from the Bearish Rising Wedge pattern as drawn.

The gap under $100.00 is a big warning sign and if price can’t rally back suddenly above $100.00, then we’ll expect additional downside selling pressure to collapse the stock potentially back toward the $85.00 and $80.00 prior lows.

Monitor the price as it departs away from $100.00 and adjust/take your trades accordingly.