Two months into 2016 and the stock market is falling to fresh new downtrending lows.

Let’s take a quick look at the chart, note the new trend and highlight the key levels for planning and trading. 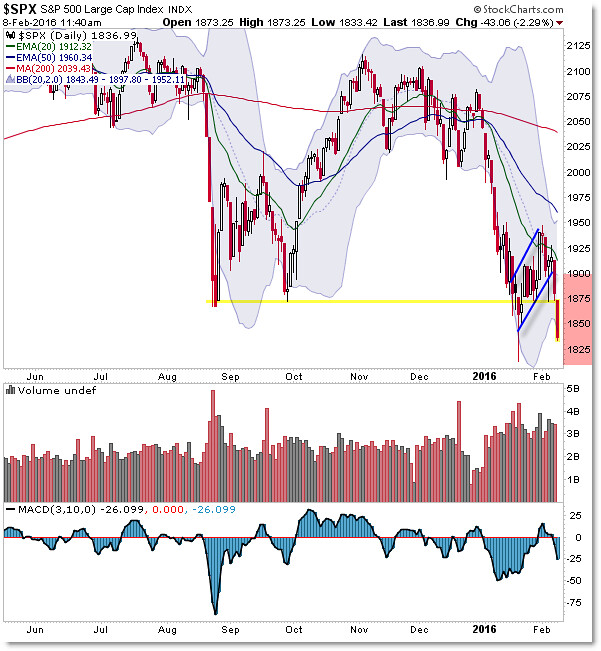 Price spiked to a new collapse low in mid-January, rallied up into a Bear Flag pattern and broke down away from the 1,900 level (triggering an aggressive short-sell signal) lower.

We’ll see the Weekly Chart shortly but for now, note the ongoing downtrend and sell-swing price pathway (red highlight) on the Daily Chart above.

Objectively the US Stock Market is in a confirmed downtrend as evidenced by the series of lower price lows, lower price highs, and a bearish moving average orientation (structure).

Lower lows continue to be favored… and realized.

Here’s the Weekly Chart which opens the perspective to the floors of support targets below: 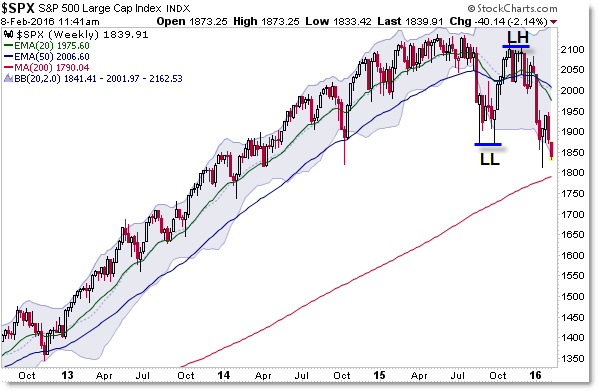 Starting with the Trend Structure, the “LL” on the chart above highlights the “Lower Low” in late 2015 that resulted in a “LH” or “Lower High” later in 2015.

This resulted in an objective and official Trend Reversal from Up (technically sideways) to the new Downtrend.

That’s right – the US Stock Market is officially in a chart-based Downtrend.

The lower Weekly Bollinger band trades at 1,841 as well.

Should the sellers continue their campaign, the S&P 500(NYSEARCA:SPY)  likely trades down toward the 1,800 level.

If in the near-term future, price breaks and holds under 1,800, then even lower downside projections will extend lower as the downtrend extends into the future.