Last week, I wrote to you about some very big news for the future of legal cannabis. It’s a major deal, but nobody seems to be talking about what’s going on.

You already know that the head of the Office of National Drug Control Policy (ONDCP) thinks the federal government should get out of the way.

And you learned about the Drug Enforcement Agency’s (DEA) efforts to make cannabis more easily available for federal research.

But something happened this week that should have sent every single cannabis stock on the market flying.

It’s no secret that the Democrat Party is mostly in favor of legalizing cannabis. Out of the four front-runners in the large field of presidential hopefuls, only one — Joe Biden — doesn’t support some form of full-scale legalization.

On the other side of the aisle, however, cannabis is having a tougher time gaining support, but it still is. Several red states recently voted in favor of legalizing medical cannabis. And numerous Republican office-holders have shown some support.

But at the top of the party, things have been unusually silent. Everyone knows the president is fond of voicing his opinions. From trade talks to celebrity gossip, he’s got a tweet for everything. But he’s remained mostly silent on cannabis.

Until now, that is.

You see, Donald Trump, however you feel about him, has a plan. He knows he needs a big victory to ride into the 2020 election. He needs the markets to be looking good and trade talks with China to be complete.

But if those trade talks are still going on and the markets are still turbulent, he’s got an ace up his sleeve that will help him secure more swing voters without alienating his base. It might even get some more young voters on board, too.

You might be thinking, “How does that not alienate a conservative base?” Drafting a law that says cannabis is legal probably wouldn’t make most hard-line conservatives happy.

But there are ways the president can make cannabis legal without actually making it legal. Politics is just lousy with loopholes.

Simply removing cannabis from the controlled dangerous substance list where it’s classified along with crack, cocaine, and heroin would make it much easier for states to pursue their own legalization efforts.

But if I had to wager a guess as to how President Trump would legalize cannabis without legalizing it, it would be this: cannabis becomes a states’ rights issue.

“Government Is the Problem”

Some people reading this may not be old enough to remember hearing Ronald Reagan utter those now-famous words. But there’s little doubt you have heard them since.

He was talking about the current economic situation the country found itself in and said that government regulations and taxes weren’t the solution to the problem, but the problem itself.

And that caught the ear of the country. Especially folks who felt the federal government had grown too big and was interfering in too many aspects of personal life.

Ever since then, the fight for a “small government” has become a pillar of the GOP. And that’s why Trump can retain his base.

All the federal government really has to do is pass the buck, so to speak. Trump can just give the decision to the states. The states have been making them already despite federal prohibition.

And the president doesn’t have to legalize it to let states continue to do so. He just has to encourage the federal government to give the power to the states.

That’s exactly what a true conservative wants. Get Washington D.C. out of our backyard and let us make our own decisions.

And that’s Trump’s ace in the hole. He can appease more liberal voters and make his base happy at the same time.

If Alabama wants cannabis to be a drug, Alabama can vote to make it one. If New Hampshire wants it legal, well, New Hampshire can make it so.

Coming Soon to a Portfolio Near You

I’m not sure if you all were watching cannabis stocks before Canada implemented nationwide legalization. But I was. I was invested in a few. And I was pretty happy with the results.

You see, by 2016, legal cannabis was a pretty foregone conclusion. The questions were all about when, not really if, it would happen.

You had to do a little more research to find the good investments. It was kind of like the Wild West boomtowns with everyone rushing to cash in. But there were good ones out there.

And if you’d identified them back in 2016 — just two years before Canada legalized cannabis — you’d have seen the biggest profits of your life.

In the two years before Canada legalized, shareholders in Canopy, Cronos, Aphria, and Aurora saw their investments skyrocket. 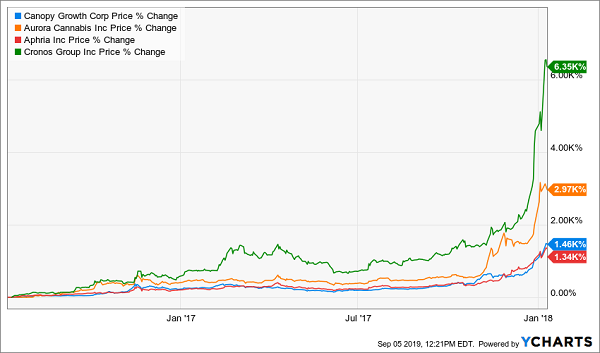 And Cronos’ shareholders cashed in a fortune when their $100,000 investments became $6.45 million treasure chests.

In the run-up to United States legalization, the gains are going to be even bigger, though. Canada has the GDP of California. That’s big. But when you add the other 49 states in, it gets a whole lot bigger.

That means there is going to be far more money fueling the industry. And investors are going to send stock values even higher. And it could all happen within the next year.

You see, President Trump is already the president. The Democrat candidates all have to wait until 2021 at the earliest before they can do anything presidential.

And if Trump wants to take away a big part of many of their campaigns, all he’s got to do is wave a pen.

So now may be the last chance many investors have to get in on the companies that are going to dominate the U.S. cannabis market before their stocks soar thousands of percent higher.

But I’ve got a hint for you: The companies I mentioned in that chart are not going to be the stocks that make new investors rich. Those big winners are companies you’ve likely never heard of that still trade over the counter for mere pennies.

Marijuana Monopoly in the Making

You see, while the “analysts” on TV and Twitter have been talking about the companies that dominated the last cannabis-fueled rally, I’ve been researching the industry here in the U.S. to find the next big names.

Those guys are content to talk about old news. I prefer to make new headlines.

And I’ve found a company that’s been quietly taking control of a niche in the cannabis industry right here in the United States. Over the past few years, it’s expanded from one operation in one state to become an international cannabis company.

And whenever a state legalizes cannabis — be it for medical or recreational purposes — eventually every cannabis business in the market has to seek this company’s services. And that’s because of the laws put into place in states with legal industries.

This company’s services are literally required by law for every cannabis product sold.

And as the rest of the country gets up to speed and more states develop their own legal industries, this is the only company that’s set itself up to handle the increased demand.

And yet the stock still costs less than one dollar. The company is going completely unnoticed despite capturing the lion’s share of a very lucrative market.

Another Day, Another Dollar

But that’s not going to last. With every step we take toward whole-scale legalization in the U.S., more and more investors start learning about the massive potential in this little-known company.

And every person who gets on board sends the share price slightly higher. The stock is up over 70% in the last three months, while the markets and cannabis stocks in general took a beating. And that momentum is set to carry on straight through U.S. legalization.

So if you want to be bragging about turning your $100,000 into $6.45 million rather than lamenting missing another blockbuster gain, I’m urging you to get invested now.

There’s far too much information to cover in the space I have today. So my partner and I put together a presentation outlining all the details.

Click here and take a few minutes to watch it right now. I personally think the presentation is really valuable, and we put a lot of work into it, so I’d appreciate you watching it.

But I really just want you to get the information so you can be along for the mountains of profits that are headed our way.

So if you’re worried you won’t have time to watch the presentation and you want to get the details as quickly as possible so you can get invested before the next move takes shares up another 70% (or way more), you can get a written report by clicking here.

But whatever you do — watch the video or read the report — make sure you do it today. I don’t want you to miss out on any of the gains. And I’m sure you don’t want to either.