Price often gives visual signals before reversing, even if in real-time it looks very surprising.

Facebook (NASDAQ:FB) surprised traders with a collapse… but the collapse was preceded by at least two major warning/reversal signals.

What were they? Let’s take a look: 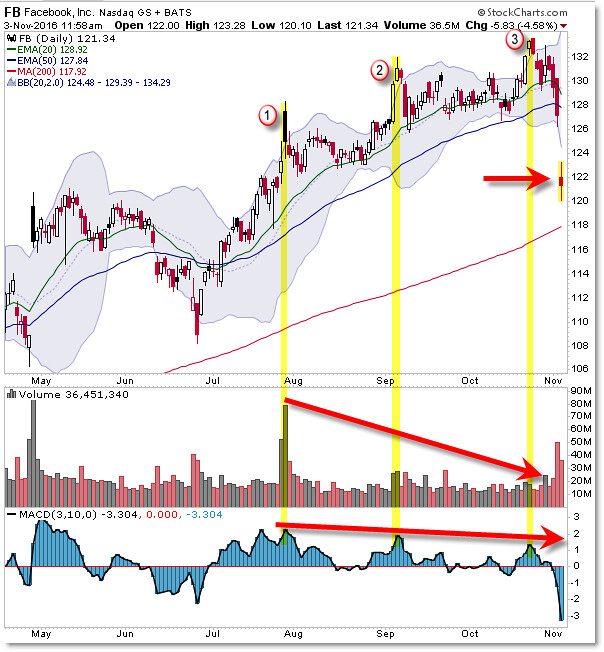 Let’s first start with the classic “Three Push” Reversal Pattern – one of my favorites.

Read more about it in our free educational resource page under “Chart Patterns.”

We just need to look at price to identify three similar or symmetrical “pushes” or swings in an uptrend.

It’s generally accepted as an Exhaustion Pattern (reversal/distribution) similar to a Head and Shoulders.

Facebook propelled itself higher with three pushes as identified with vertical highlights above.

Second, each of the three pushes (swings) was met with a NEGATIVE DIVERGENCE.

We have visual  negative divergences in both volume and Momentum.

Divergences often precede – but do not guarantee – a price reversal.

No, nothing is perfect, but when price sets up a reversal, it often gives signals of the reversal in motion.

Look for price patterns in mature trends along with negative divergences as keys to spotting a reversal in real time before and during the actual reversal.