If you were puzzled as to why United Airlines (NYSE:UAL) stock didn’t collapse – or at least fall – yesterday, join the crowd.

As word spread via daytime news, Twitter, Facebook, and other sources about the forced removal of a passenger from a flight, the price of UAL actually increased.

Logic – and the bad publicity – would suggest at least a down day when the news broke.

Worse than that, not only was the stock price higher during a negative news cycle, but it also broke resistance into a potential bullish breakout play.

If your head is spinning, look no further to what happened this morning as a vicious Bull Trap triggered and stock prices collapsed more than 4% as word of the incident spread around the globe.

Let’s start with the intraday chart to pinpoint the bull trap and collapse outcome: 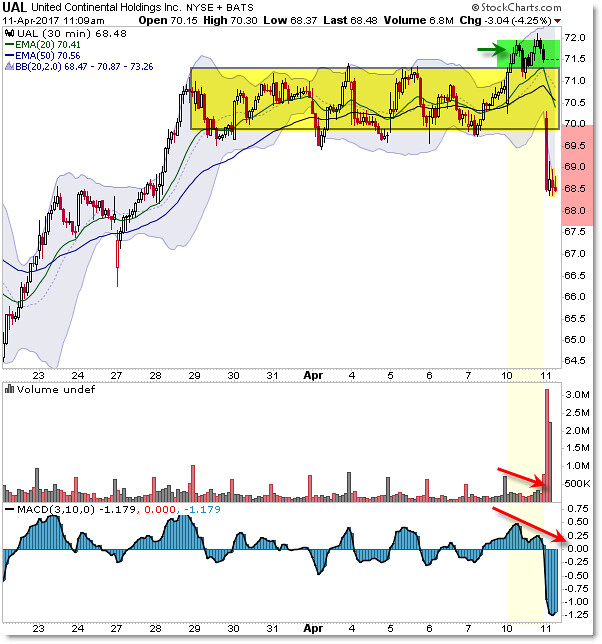 For reference, this post isn’t about the incident itself, but instead the publicity and reaction in the stock.

On the negative news day, buyers pushed the stock higher out of the range not once but twice, peaking with negative volume and momentum divergences at the $72.00 level.

Negative news/press aside, this is a divergent situation or non-confirmation of a breakout in motion.

IF volume and momentum FAIL to rise as stock breaks from resistance, odds then favor a reversal.

And what a reversal it was.

This time we have the spread of the negative publicity as a reason for why the stock collapsed, but it did so in the most vicious way (by initially rallying and tricking traders into buying a breakout BEFORE collapsing, as would have been logical to expect).

Here’s the pattern playing out on the Daily Chart and perhaps what to expect next: 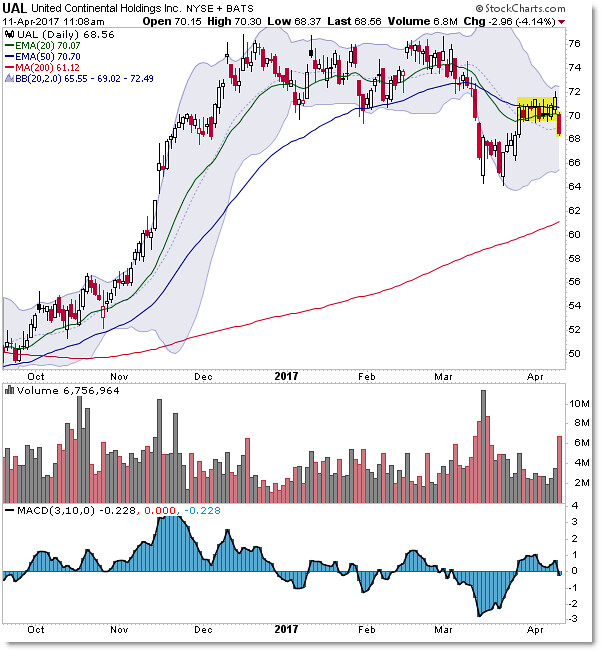 We saw a standard retracement back toward the falling 20 and 50 day EMAs near the $71.00 level.

The logical play would be to expect a retest of the low, or a sell-swing down toward the 200 day SMA.

We’re now seeing that logical sell-swing action (beneath $70) in motion, though it seems to have required a huge international incident to set shares tumbling lower on this bearish pathway.

Continue following this stock and learn the lessons from this example (Bull Trap/Reversal, News/Reaction, etc).