Cutting to the point, Apple shares (AAPL) either support-bounce and rally up away from the $93.50 level or else we see another collapse and breakdown lower.

Either way, whether or not you’re trading Apple for fun or profit, focus your attention on what happens here: 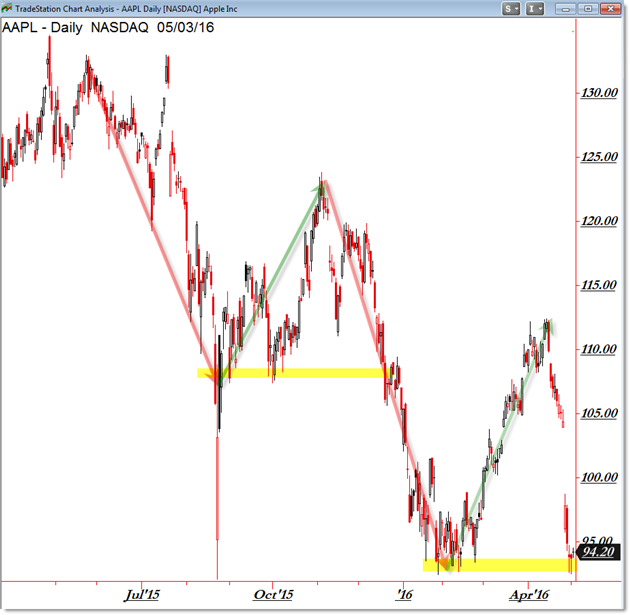 Our “Price Only” Chart shows the downtrend (lower lows and lower highs) in motion from the early 2015 peak.

Price trended down away from the $130.00 level toward the current $95.00 per share pivot over the last year.

We’re at a similar point as we saw in December with price retesting a prior support low ($110.00) after a downswing and retracement bounce higher off support.

Ultimately price failed to hold support, breaking powerfully lower under $110.00 for a collapse move toward $95.00 in January 2016.

A similar upward retracement took price above $110.00 – the prior pivot – and the recent April sell-swing pushed price straight down to where we are now at the $94.00 critical pivot.

Officially the $93.50 level will be the focal point for traders as we plan for a “Bounce or Break” outcome.

Our trades – and open position management – should be based on what happens here.

The Bullish Thesis calls for a rally at least back toward $100 for a short-term trading opportunity.

However, any future breakdown to fresh new 52-Week Lows suggests another liquidation (sell) swing even lower.

While the plan is clearer on the “Price Only” chart, if you’d like a bit more strategy, we have our Indicator Chart: 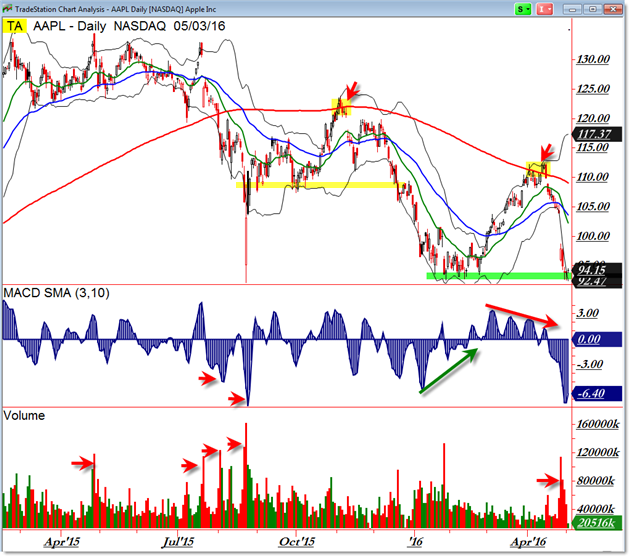 This time we can see Momentum, Volume, and the Moving Averages that correspond with our Price Trend.

While we’ve added indicators, the logic is the same.

Volume and Momentum suggest a future potential breakdown under $92.50/$93.50 per share.

Ultimately, we’re looking objectively (without bias) to trade the departure (movement away from) this level.

A bullish opportunity (stop under the low) exists while price trades “up away from” support.

Otherwise a future breakdown allows for an aggressive, pro-trend short-sell opportunity similar to that of January.

A stop would thus be placed above the $93.00 level depending on your risk tolerance.

Even if you’re not trading Apple (AAPL), it should be interesting to watch the immediate reaction right now.