A Couple of Economic Data Reports Are Positive

Last week, we got a critical “stick save” from a couple economic data reports.

Now, if you’re wondering, a “stick save” is a hockey term for when a goalie prevents a goal using only his stick. If you watch hockey, you know that most goals are prevented, or saved, by the goalie using his pads. He’ll go down on his knees or lay out across the goal to prevent the puck from entering the net.

But every once in a while, you’ll see a goalie who is in a position where he is unable to get his body in front of the puck. And so he has to try and swat the puck out of the air or off the ice with his stick. Like this:

As you can see, the surface area of the stick is not that much wider than a hockey puck.

Now, a hockey puck can travel around 100 miles per hour after a well-struck slap shot. The record is 108 mph. So it’s pretty remarkable when a goalie actually makes a stick save, because the margin for error is about as slim as it gets. If the goalie is off by an inch or so, it can mean the difference between a win and a loss.

In the photo above, Nashville Predator goalie Carter Hutton makes an amazing spinning, behind-the-back, no-look stick save on a deflected puck. Lucky? Sure. It was lucky. I mean, he has to spin just to be in position to fling his stick around behind him. That he managed to make contact with the puck is remarkably lucky.

If you’ve been watching the daily stock market (which I don’t recommend for long-term investors, by the way), you well know that the recent sell-off was getting more and more intense. By Thursday, February 11, the S&P 500 had peeled off 100 points (5%) in just five days. For the month of February, the S&P was down 6.5%.

And to make matters worse, several rally attempts had failed, with stocks making a surge higher, only to be overwhelmed by selling and finishing deep in the red. These are called “bearish reversals,” and they are simply brutal for investors…

There’s just nothing worse than seeing the hopes and optimism (and profits) from an early rally completely evaporate into a sea of red — and more losses on your brokerage statement. It’s action like this that pushes investors out of their investments, because they just can’t take it anymore. They become governed by the fear of more losses.

This phenomenon is commonly known as “capitulation.” Ironically, traders treat capitulation as a bullish signal because it indicates that everyone who wants to sell has sold. All that should be left is buyers.

Of course, you need more than a single event like capitulation to truly make a bottom for stocks. Back in 2008–9, there were more capitulation moments than you could shake a stick at, but prices kept falling as the U.S. economic data got worse and worse…

What Makes a Stock Market Bottom?

It may sound funny to say that each stock market bottom has a different shape and feel, but it’s true. But there are a few things to watch out for. One is the capitulation moment. A capitulation moment will be a big decline on big volume. And it may reverse to the upside the same day…

Another thing to watch out for at a market bottom is a big rally for the most hated stocks. I will never forget when banks rallied on March 10, 2009. Bank of America and others were up around 15% that day.

Last week, Twitter was one hated stock that rallied strong. The stock had lost 35% of its value since the start of the year. But it suddenly reversed for a 15% one-day gain. When the crappiest stocks rally strong like that, it can be an indication that a true shift in sentiment is at hand.

One more thing to watch out for: some fact or data point that puts the lie to the bear market scenario that’s playing out.

There was the Chinese economic slowdown, the emerging market weakness, growing international debt, weakness in Europe, declining corporate earnings, and lower energy and commodity prices. All of these added together created a nasty formula that equaled a higher possibility of a U.S. recession.

And the possibility of a U.S. recession started to look imminent around the start of the year when economic data — especially manufacturing data — started coming in really bad. You may recall one in particular, the Empire State Manufacturing Index, which actually showed the manufacturing sector was shrinking.

That’s the backdrop against which we got the “stick save” from two pretty significant economic reports. The first and most important was the January Retail Sales report. Ignoring weak gasoline prices, retail sales (NYSEARCA:XLY) were up 0.4% in January. Plus, the December retail sales numbers were revised to a gain of 0.2%, from a loss of 0.1%. 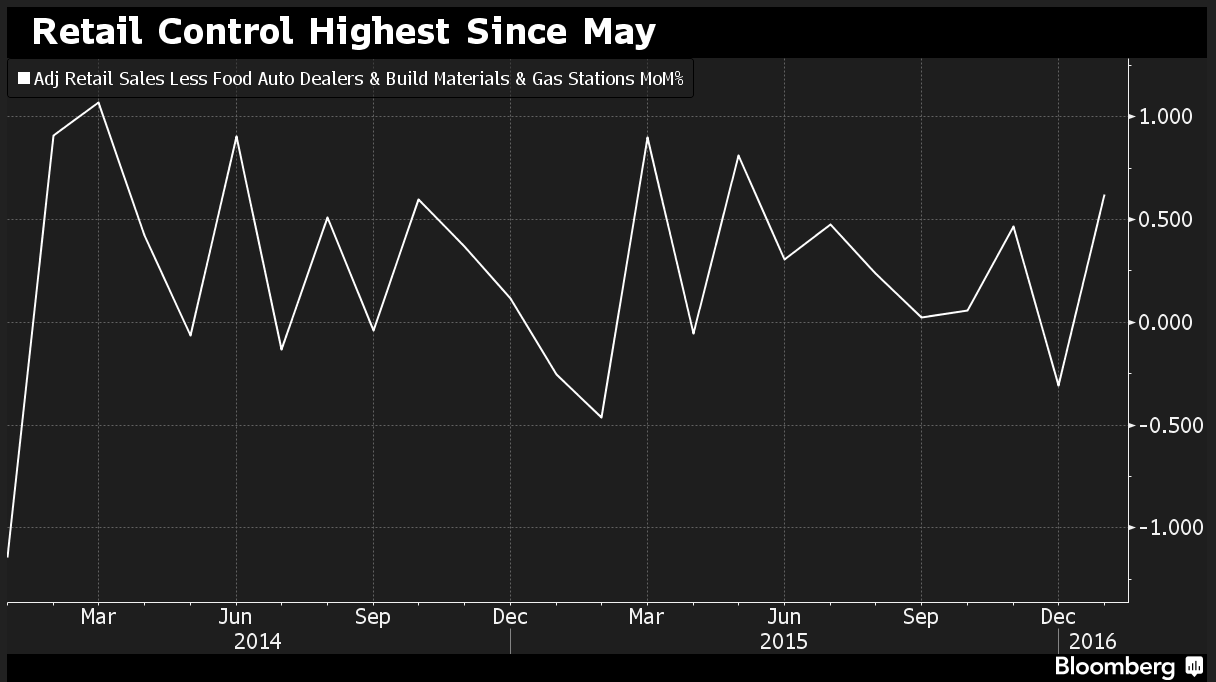 Those numbers may not sound huge. But they are actually very solid one-month gains, as this Bloomberg chart shows.

Some highlights: Online sales were up 1.6%, the best in almost a year. Sales at general merchandise stores were up 0.08%, the biggest advance since May. Auto sales were solid, and recent reports on wages and employment have also been pretty good.

What we have is a picture of an American consumer that is in much better shape than was expected. This serves to put the lie to the recession fears (don’t forget some were saying we’re already in a recession).

Now, I don’t want to give the appearance that I think everything is hunky-dory and stock prices will rally from here. All of the negative catalysts (China, emerging markets(NYSEARCA:EEM), etc.) are still with us. And they aren’t going anywhere soon, as far as I can see.

Also, we have a Fed that appears intent on raising interest rates further. Will they? I don’t know. But they give the appearance that they will, and that’s enough to convince investors that current equity valuations are/were out of whack.

Sure, we’ve got room for a rally here, but don’t look for new highs for the S&P 500 (NYSEARCA:SPY) just yet. For now, let’s be patient and anticipate a range-bound market and economic data that doesn’t get worse for the next couple of months.

Economists are expecting some pretty solid growth in the second half of this year. Frankly, I think we are already seeing the groundwork being laid for that with the better-than-expected retail sales data. It’s just that we need to see more than one month of good data for it to become a trend.