Economy Is Still Expanding at a Solid Pace

The directional bias for US economic activity continues to skew slightly negative, based on CapitalSpectator.com’s Macro Trend Index (MTI). Although the economy is still expanding at a solid pace, MTI still indicates that a downside bias persists for the directional trend. The negative tilt, however, is fractional and so the overall signal remains in neutral terrain.

MTI uses two business cycle indexes as inputs: ADS Index, published by the Philly Fed, and the Weekly Economic Index (WEI) via the New York Fed. Each index takes a different approach to monitoring US economic activity in real time, using a variety of indicators, some of which are published at daily and weekly frequencies. MTI is designed to quantify the degree of deceleration or acceleration in the overall macro trend. As such, MTI is not a measure of growth per se, but an index that quantifies the strength or weakness of the overall trend, be it positive or negative. Accordingly, the current reading tells us that the pace of growth is more or less holding steady at the moment. (For details on MTI rules, see this post.) 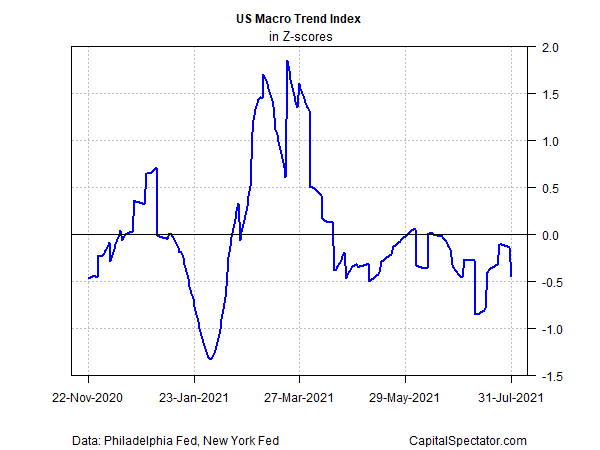 For additional context, here are the raw ADS and WEI values in recent history. Note that in both cases the indexes reflect above-average rates of growth (indicated by readings above zero). 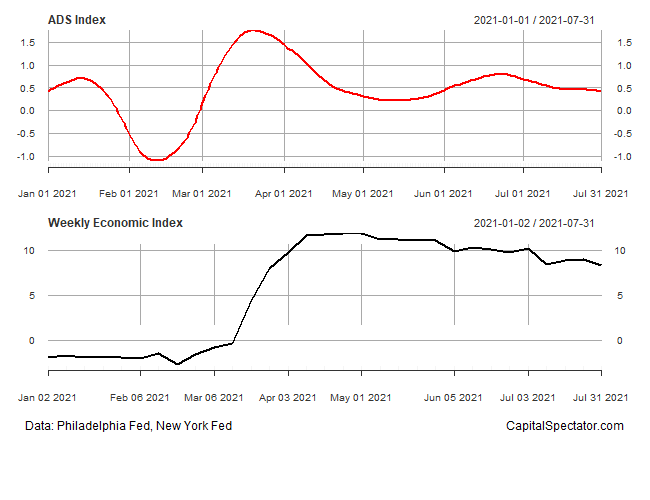 MTI can be used as an early indicator of a directional change in economic activity. When and if MTI’s readings show significant readings, either positive or negative, that may be a sign that a significant shift in the economy may be approaching.

MTI’s recent readings show that the economy’s positive growth rate has been slipping. For the moment, MTI’s downside bias is mild to the point of trivial. MTI reflects z-scores, which indicate the number of standard deviations above or below the mean value, which in this case is calculated based on a rolling 252-period basis via the ADS Index (which currently dates back to late-November 2020 for the past 252 periods). MTI readings between -1 and +1 can be interpreted as short-term noise, although persistently positive or negative values over an extended period within that band may be a sign of a significant directional change in the near-term future.

By contrast, readings greater than +1 (or below -1) indicate relatively large, sudden shifts in the directional bias of the economic trend.

The current reading, based on data through July 31, point to a relatively stable trend, albeit with a trivial downside bias. On that basis, the economy’s above-average growth profile appears set to persist for the near-term future.

Originally Posted by The Capital Spectator