Instead, it was an illustration of how impatient investors are forcing managers to closet index in order to manage their own business risk.

I received a lot of feedback to my post, How Valeant revealed the dirty little secret of fund management. Some of it was off the mark, as the post was not intended to be a discussion on the merits of Valeant (VRX) as an investment. Instead, it was an illustration of how impatient investors are forcing managers to closet index in order to manage their own business risk.

In the post, I cited an example that showed the simple act of a single wrong decision on one stock has the potential to sink an entire investment management practice – and we had’t even begun to discuss the myriad of other ways that risk can rear its ugly head.

It all boils down to the question of how patient investors are with their managers and how much rope they are willing to give their managers to succeed, or fail.

The Value Investor example
Consider, for example, a style of investing that is known to reward patient money – value investing. At Euclidean Technologies, John Alberg and Michael Seckler demonstrated how difficult the value style can be. First, they did a backtest of a simple value discipline:

In this analysis, the value strategy is simply to buy companies that are most inexpensively priced in relation to their prior year’s EBIT (earnings before interest and tax). The top chart plots the simulated performance of this simple approach to value investing in context of the SP500’s total return. The bottom chart shows how much and for how long the value strategy fell behind the SP500 (NYSEARCA:SPY) at each point in time.

Across this particular simulation, over the period January 1973 to June of 2014, the value approach achieved a compound annualized return of 17.2% while the SP500’s total return (price change plus dividends) did 10.3%. Sounds amazing!

However, as the bottom chart shows, an investor using this value strategy would have had to endure 14-years (1988 through 2001) where he wouldn’t have received much feedback that he was on the right path. Soon after recovering from falling behind the market by 30% from 1988-1991, he would have lagged by nearly 50% across a grueling 6 years. 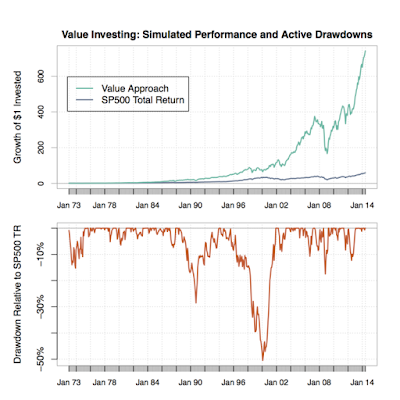 Managing career risk
How many people can endure 14 years of poor performance, whether it’s their own money or with client money?

We can all sit around and nod sagely that investment discipline is important, but what actually happens in the real world? Ben Carlson recently wrote about the difference between academic investment research and real world research:

When new investors are just starting out in the markets they’re often told that a paper portfolio is a good way to test out a strategy without putting real money to work. This one sounds good in theory but is fairly useless in practice.

The thing is that there are no simulations that can prepare you for the emotions you feel when investing actual money in the markets. The feelings you get from making or losing money can’t be simulated. The same is true of those who try to turn research into an investable strategy.

He highlighted a quote from an interview with Cliff Asness of AQR (emphasis added):

Well the single biggest difference between the real world and academia is — this sounds overly scientific — time dilation. I’ll explain what I mean. This is not relativistic time dilation as the only time I move at speeds near light is when there is pizza involved. But to borrow the term, your sense of time does change when you are running real money. Suppose you look at a cumulative return of a strategy with a Sharpe ration of 0.7 and see a three year period with poor performance. It does not phase you one drop. You go: “Oh, look, that happened in 1973, but it came back by 1976, and that’s what a 0.7 Sharpe ratio does.” But living through those periods takes — subjectively, and in wear and tear on your internal organs — many times the actual time it really lasts. If you have a three year period where something doesn’t work, it ages you a decade. You face an immense pressure to change your models, you have bosses and clients who lose faith, and I cannot explain the amount of discipline you need.

Managers face incredible career risk under those circumstances. Even Warren Buffett isn’t perfect. CNN Money recently ran a story entitled Warren Buffett’s top stocks are dogs this year, which pointed out that Berkshire top holdings (IBM, WFC, USB, GS, KO, AXP, PG, WMT) have all performed poorly this year. Now imagine that your manager is Brand X instead of a well-known name like Warren Buffett, and your Brand X manager followed a Buffet-like discipline. How much patience would you have with that manager after a bad year?

The following example should not be interpreted my “I told you so” victory lap, as I have been badly wrong in my investment career. When I factor in the sheer volume of hate mail that I received from reader when I was bearish on stocks early this year and when I turned more constructive on equities after the August sell-off, many investors are not very patient at all:

Why I am bearish (and what would change my mind) May 2015 (red arrow below)
Relax, have a glass of wine August 2015 (blue arrow below)
Why this is not the start of a bear market September 2015 (purple arrow below)

Key lessons
There are two key takeaways here. For investors, your lack of patience, both at an individual and institutional level, is forcing investment managers to take steps to control their own business risk and become sensitive to benchmark tracking error. If you want to know who to blame for closet indexing, look in the mirror.

Managers also have to recognize that, like it or not, client time horizons are very short. Even for institutions, the typical grace period for poor performance is no more than 2-3 years. In that case, you need to be aware of business risk when sizing your bets in a portfolio.

Notwithstanding the possible solvency problems that come with bad performance should AUM plummet, the way a manager controls business risk also affects the culture of the organization. For example, sales and marketing staff tend not to have the same level of conviction as the investment staff on the investment philosophy. Managed improperly, they can become “order takers” during good times, which is an easy job that practically anyone can do, but abandon the organization during bad times.

Is that the kind of organization that you want?