Today’s report on Industrial Production for September shows a 0.63% decrease month-over-month, which was below the Investing.com consensus of -0.5%. The year-over-year change is -7.28%, up from last month’s YoY decrease.

Note: This commentary has been updated to incorporate the September data for Industrial Production.

Today’s report on Industrial Production for September shows a 0.63% decrease month-over-month, which was below the Investing.com consensus of -0.5%. The year-over-year change is -7.28%, up from last month’s YoY decrease.

Here is the overview from the Federal Reserve:

The chart below shows the year-over-year percent change in Industrial Production since the series inception in 1919, the current level is lower than at the onset of all 17 recessions over this time frame of nearly a century. 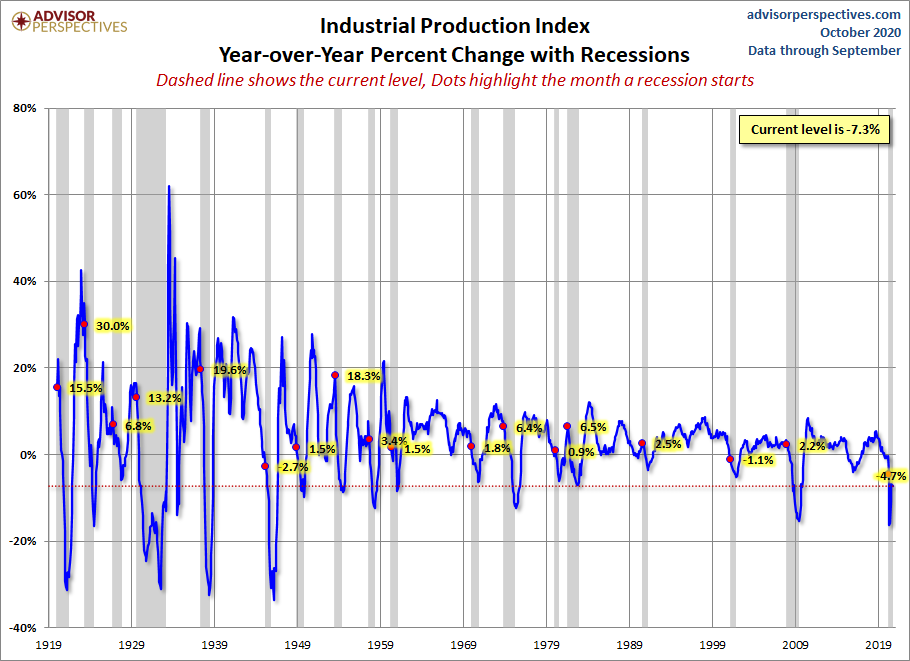 The Fed’s monthly Industrial Production estimate is accompanied by another closely watched indicator, Capacity Utilization, which is the percentage of US total production capacity being used (available resources includes manufacturing, mining, and electric and gas utilities). In addition to showing cycles of economic growth and demand, Capacity Utilization also serves as a leading indicator of inflation.

Here is a chart of the complete Capacity Utilization series, which the Fed began tracking in 1967. The linear regression assists our understanding of the long-term trend. We’ve highlighted the post-recession peak in November 2018. 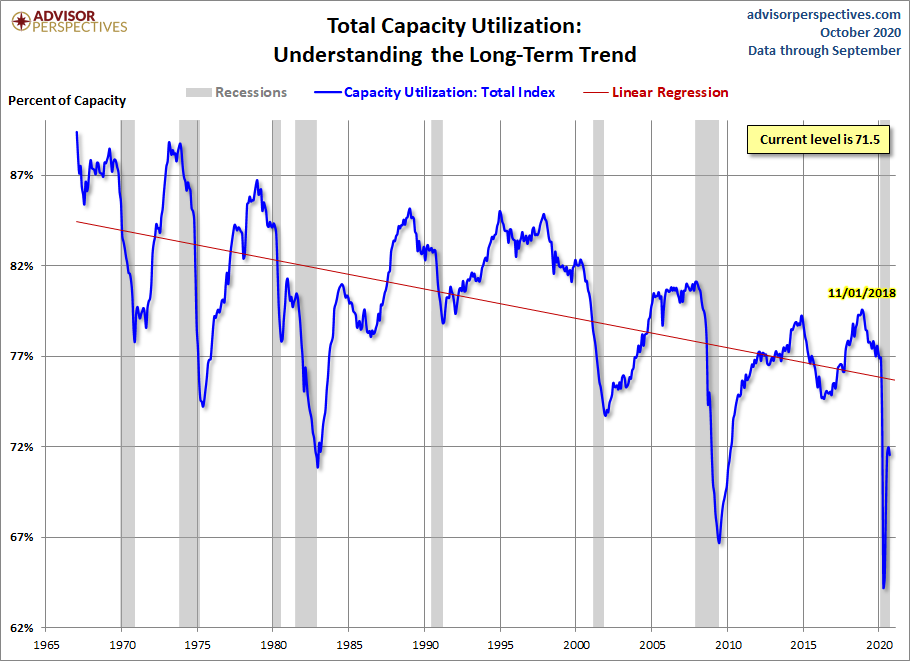 The latest reading is well below its interim peak and the regression.

The chart and table below illustrate the performance of the generic Big Four with an overlay of a simple average of the four since the end of the Great Recession. The data points show the cumulative percent change from a zero starting point for June 2009. We will update this chart and table to reflect the current recession when a real trough is confirmed (there may be more in store). 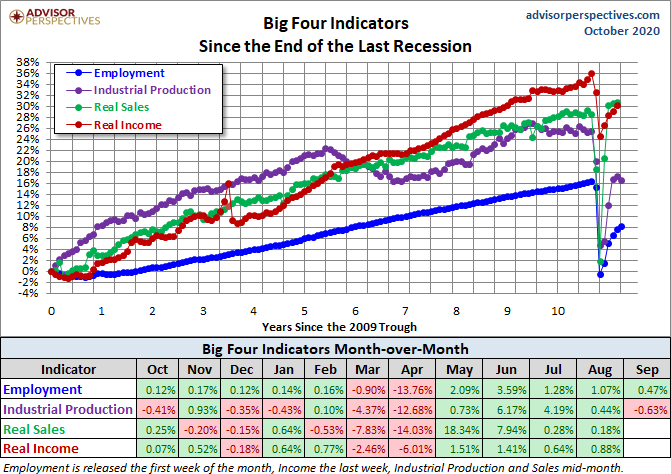 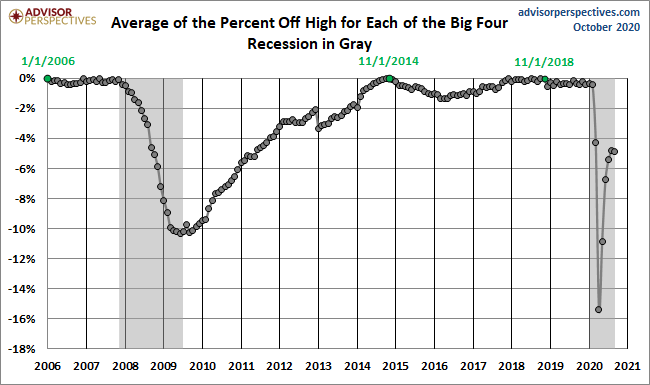 The next update of the Big Four will be the latest numbers for real retail sales, out later today. 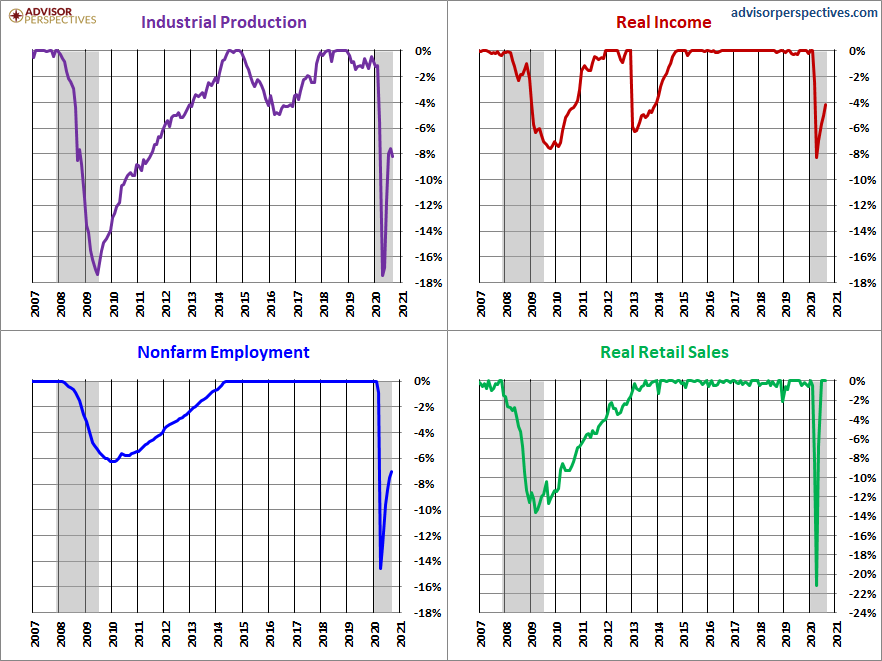 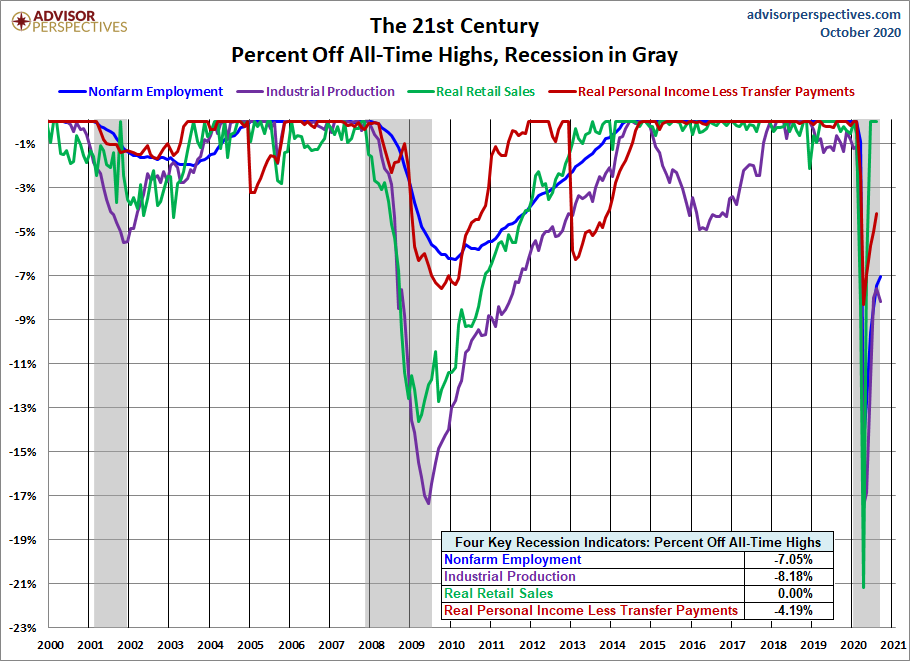 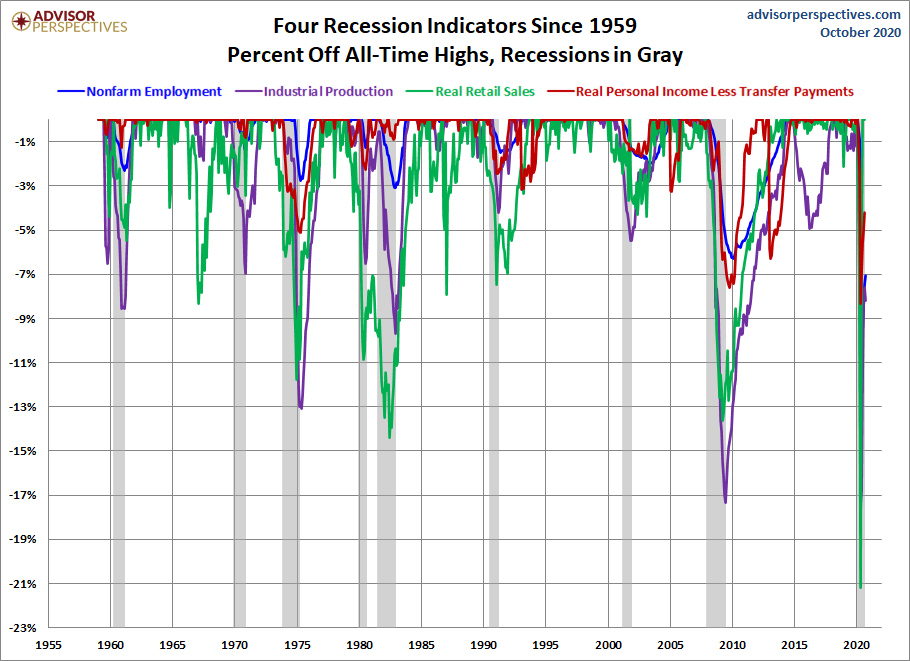 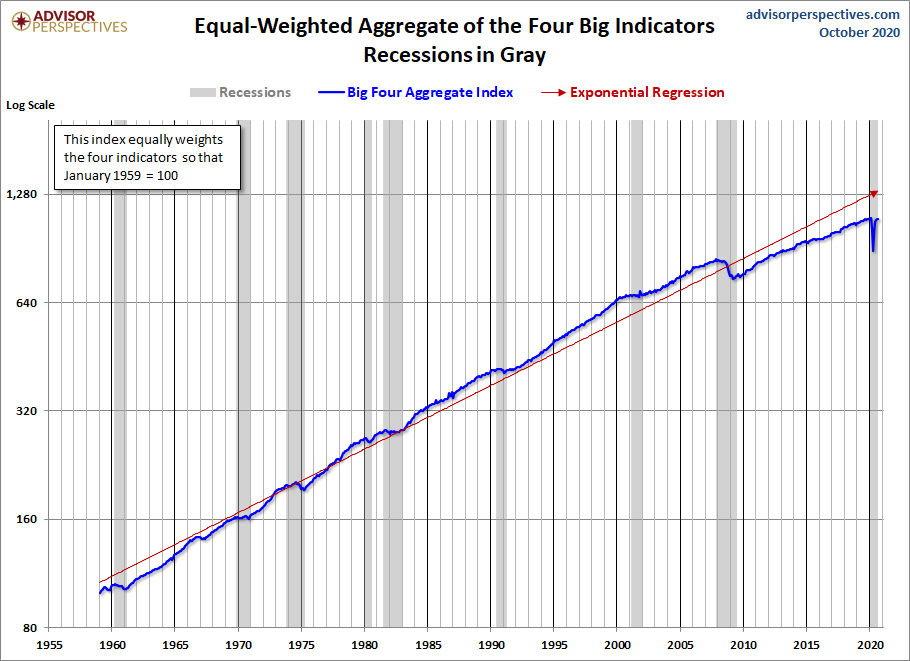 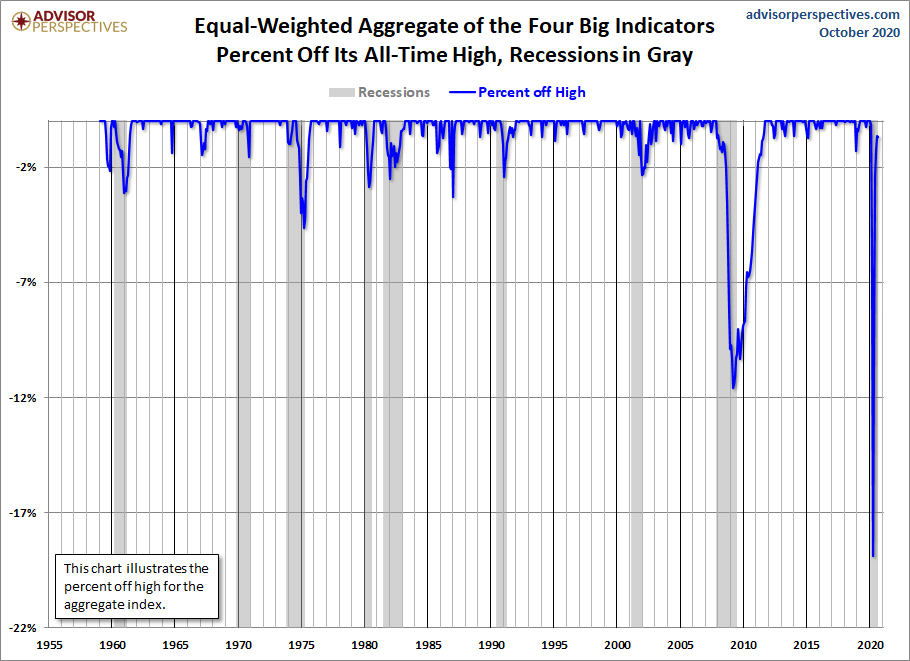 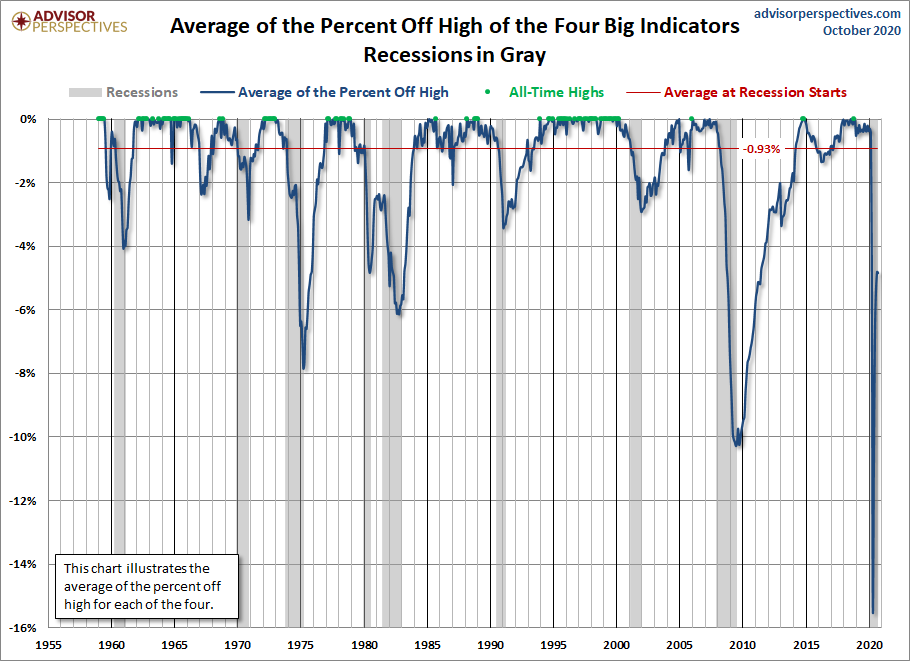 The US Industrial Production Index (INDPRO) is the oldest of the four indicators, stretching back to 1919, although we’ve dropped the earlier decades and started in 1950. 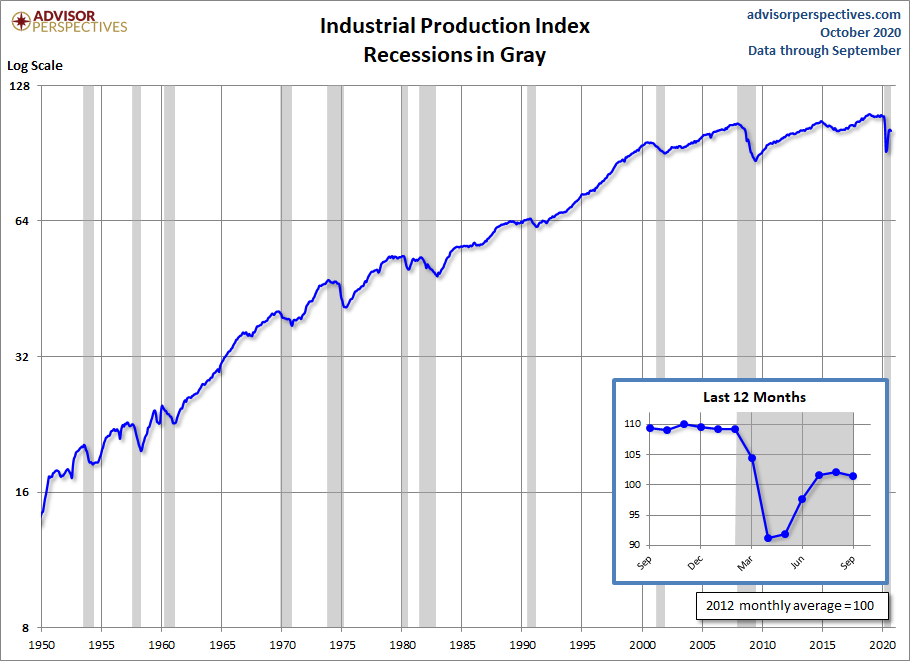 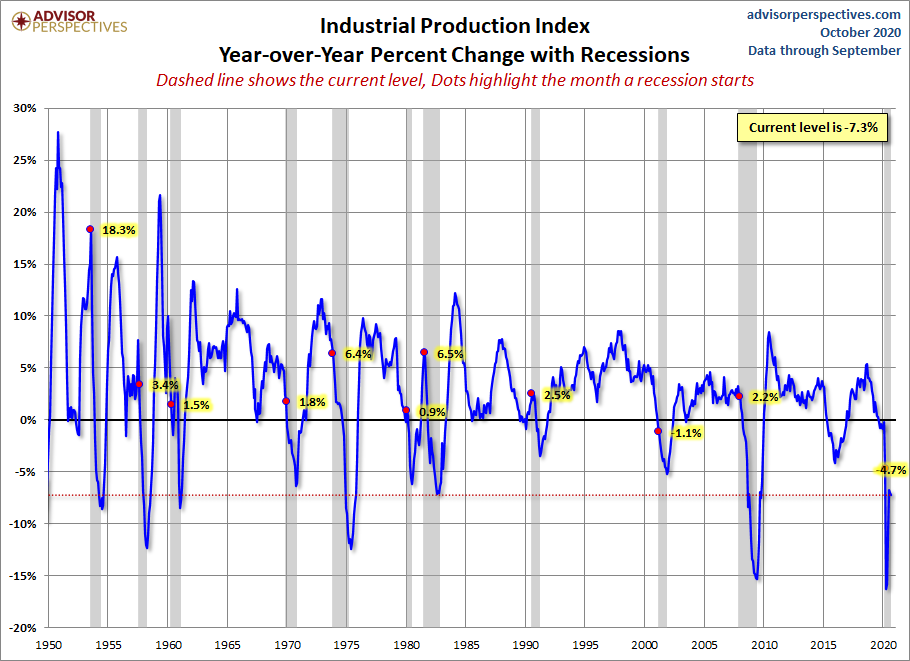 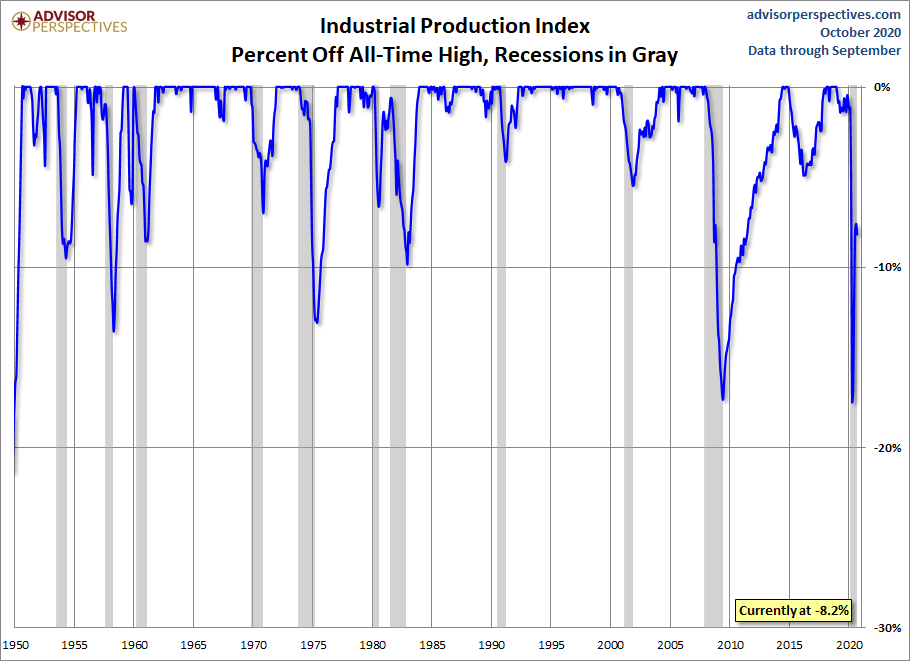 A Note on Recessions: Recessions are represented as the peak month through the month preceding the trough to highlight the recessions in the charts above. For example, the NBER dates the last cycle peak as December 2007, the trough as June 2009 and the duration as 18 months. The “Peak through the Period preceding the Trough” series is the one FRED uses in its monthly charts, as explained in the FRED FAQs illustrated in this Industrial Production chart.