What Is a K Shaped Recovery?

Economists have come up with every variation of applying a letter of the alphabet to the economic recovery. Whether it’s an “L,” a “W” or a “V,” there is a letter that suits your view. But what is a “K”-shaped recovery?

“A K-shaped recovery occurs when, following a recession, different parts of the economy recover at different rates, times, or magnitudes. This is in contrast to an even, uniform recovery across sectors, industries, or groups of people. A K-shaped recovery leads to changes in the structure of the economy or the broader society as economic outcomes and relations are fundamentally changed before and after the recession.

Following the economic shutdown, much of the data shows strong signs of improvement. However, several different economic phenomena are driving a K-shaped recovery.

One of the more interesting aspects of the recovery has been that of “creative destruction:”

“Creative destruction is a concept in economics which since the 1950s has become most readily identified with economist Joseph Schumpeter. Schumpeter derived it from the work of Karl Marx and popularized it as a theory of economic innovation and the business cycle.

According to Schumpeter, the ‘gale of creative destruction’ describes the ‘process of industrial mutation. The process continuously revolutionizes the economic structure from within, incessantly destroying the old one, incessantly creating a new one’” – Wikipedia

Industries like technology(NYSEARCA:XLK), retail(NYSEARCA:XLY), and software services are leading the way in “creative destruction.” Technology companies like Apple Inc., Alphabet Inc., and Microsoft Corp. saw earnings expand during the economic recession. General merchandise retailers such as Target, Walmart, and Costco, along with online video entertainment giants Netflix Inc., Walt Disney Co., and YouTube, made sizeable gains as the economy closed. Biotech, Pharmaceuticals, and, of course, “Work From Home” firms like Slack and Zoom blossomed with online retailers like Amazon and Shopify.

However, while the “fire of necessity” gave birth to a host of new companies, simultaneously others got lost. Travel, airlines, cruises, movie theaters, traditional retailers, and real estate remain under significant financial pressures.

In the bottom half of the “K” shaped recovery lies the majority of the economy. Its recovery is questionable the longer the pandemic goes on. The shift to “Work From Home” or “WFH,” along with the rise of the associated technologies, has companies questioning the need for expansive commercial offices.

WFH also requires less employment. In traditional office environments, assistants, associates, and others were previously relied on for more mundane tasks. However, in the WFH environment, those roles become less important as independent working rises.

The need for “less” during the employment recovery is very much part of the “K” shape. Yes, certainly those with skill sets are finding jobs versus those without. Importantly, employers are also finding out they can hire higher qualified talent for less money. For example, I spoke to a restaurant owner who has been hiring as the economy reopened in Texas. His experience has been an overwhelming number of applications for waitstaff, bartenders, and hosts by individuals with bachelor degrees or better.

It isn’t there aren’t jobs for those with a high-school diploma or less, individuals are just taking those jobs with greater education levels. The process of “creative destruction” is in action, and there are plenty of statistics currently suggesting such is the case.

Not A Broad Recovery

However, if you look at the stock market as an indicator of economic recovery, it certainly seems these are isolated cases.

Unfortunately, such isn’t the case.

As noted by the WSJ previously:

“As of December 2019—before the shutdowns—households in the bottom 20% of incomes had seen their financial assets, such as money in the bank, stock and bond investments or retirement funds, fall by 34% since the end of the 2007-09 recession, according to Fed data adjusted for inflation. Those in the middle of the income distribution have seen just 4% growth.” – WSJ Indeed, one of the simplest ways to envision the current “K” shaped recovery is by looking at the surge of the stock market since late March. However, as we have noted previously, the “stock market” is no longer representative of the underlying economy. Such is due to massive interventions by the Federal Reserve, which pushed speculation in “risk” assets to historic levels

Even though the revenues generated by corporations come from economic activity, the Fed has fostered a “debt-driven” explosion of speculative investment activity. Despite the economy plunging in Q2 by most since the “Great Depression,” unemployment surging, and nearly 50% of small businesses nationwide failing, the stock market soared to new highs. Such is a clear example of how Central Bankers distorted the economic relationship.

It also exacerbated financial inequality when the top 1% of earners owns 52% of the stocks and mutual funds. 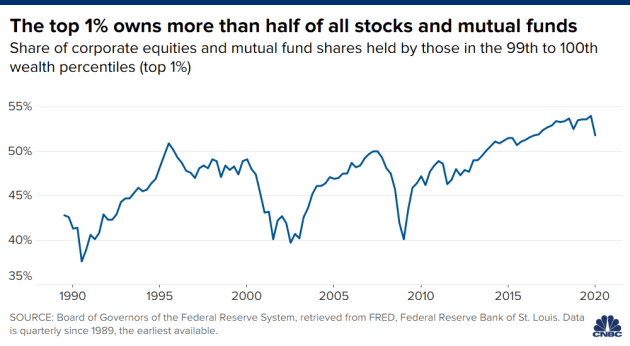 As I showed last week, the differential in ownership in financial assets between the top 10% of the economy, which owns fully 88% of the stock market, and everyone else isn’t even close. While the “rich get richer,” the poor continue to suffer. Unfortunately, the fiscal stimulus will only worsen the divide.

In the current recovery, it is clear that those at the top of the “K” are indeed experiencing a “V”-shaped recovery. For the rest, not so much.

Unfortunately, policy-makers, along with the Federal Reserve, are stuck. Since politicians want to get re-elected, sending money to households is a way to “buy the vote.” The average American doesn’t understand their demands on the Government for more support is leading to their economic inequality.

Conversely, the Federal Reserve serves at the mercy of the major Wall Street banks, so their policy focuses on inflating assets prices for the 10%, hoping it might one-day trickle down to the bottom 90%. After a decade, it hasn’t happened.

What we are confident of is that these “new policies” are very much the same as the “old policies.” As such, they will continue to foster economic inequality, inflated assets, and a further widening of the “wealth gap.”

These policies will ultimately result in further social instability and populism. History is replete with examples of the “endgame” of socialistic experiments of running unbridled debts and deficits.

Maybe we should try something different, and allow recessions to reset economic imbalances. Yes, it will be painful in the short-term, but the long-term benefits of expanded economic prosperity might be worth it.

One thing is for sure, “repeating the same failed actions and expecting a different outcome” has never been a solution for success.

We are reasonably confident it won’t work this time either.