The sell-off on Monday signaled that the market seems poised for a test of the August lows and possibly the October 2014 lows.

I reported on the weekend that my inner trader got caught in a “low conviction long trade” (see A choppy bottom). The sell-off on Monday signaled that the market seems poised for a test of the August lows and possibly the October 2014 lows.

Despite the reversal, my inner trader decided to take his lumps and stay long. Based on my latest estimates of the analytics from IndexIndicators, the market is highly oversold on a 1-3 day time frame: 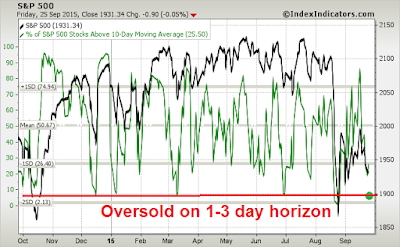 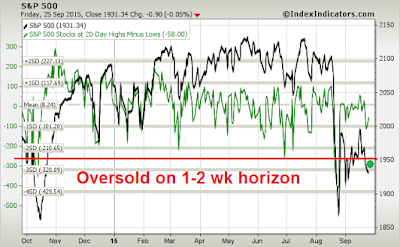 Moreover, my Trifecta Bottom Model flashed an “Exacta” buy signal and it is very close to flashing a full Trifecta signal. All that means, of course, is that the market is very oversold, – but then you knew that. 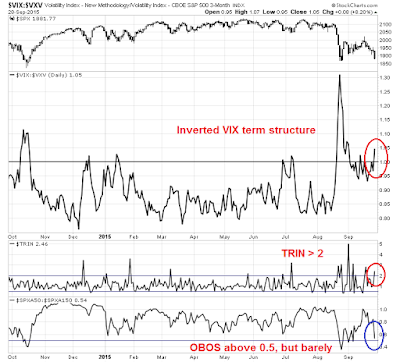 The caveat, of course, is that August experience showed us that oversold markets can get even more oversold.

A critical technical test
Most of the bearish chartists I read on social media are positively giddy right now, but Northman Traderoffered a more balanced and nuanced take on the technical condition of the US equity market. He has been watching the 5 month EMA and 20 month MA and believes that the market is at a critical technical junction:

Let me highlight the key issue. Look at this monthly $SPX chart below. For many months we have been following two specific moving averages the 5EMA and 8MA. Every month, like clockwork, these 2 MA’s have acted as critical support. This support was decidedly broken with the August flash crash. In October 2014 the break was saved into month end. Unless something magical happens this coming week it appears these 2 MAs will not be recaptured by month end. However, that’s not quite the main critical issue.

More relevant is what happens whether the shorter term 5EMA and longer term 20 MA cross over each other:

He outlined the dire consequences of a cross-over:

The consequences of a crossover are pretty clear: As we’ve outlined previously the larger macro fibs indicate a market retrace to the 38.2% Fib which coincides with the 2007 highs. Pretty solid confluence.

Incidentally, we have seen the cross-over as of the close today, but the bears have to maintain that condition until month-end, which is two days away.

Standing in the way is positive seasonality for the markets:

In my mind the October 2014 lows need to be broken in the next 3 weeks or it’s game over for bears it seems. Lest not forget that in 2014 the correction ended in the middle of October as well and managed to produce a massive rally through year end…

As we outlined last week bulls need a 1998 like save or markets face a structural break targeting 2007 highs.

Curiously the recent action in price continues to show a similar structure to 1998 so a spike into month end before renewed selling into October would not surprise:

Incidentally, when did the 1998 correction bottom? October 8.

When did the 2011 correction bottom? October 4.

So bears. To re-iterate: The monthly MAs need to be crossed and the neckline needs to be broken and STAY broken below October 2014 lows.

And bulls. You absolutely need an October magic show and get back above the daily 200MA (currently 2065) or the jig is up for a long time to come.

We will know who the winner is by the end of October at the latest.

Looking for the rally catalyst
I don’t pretend to know what the market will do in the couple of days, other than to observe that it is highly oversold and poised to test the August lows. If we were to see a support violation in the next two days, we are likely to see a positive divergence, or non-confirmation of the lows, on the daily RSI14 indicator. 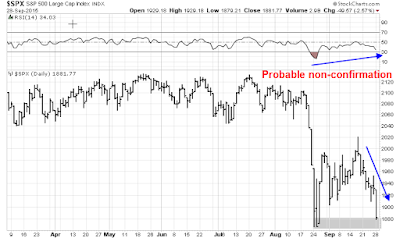 Sometimes being contrarian is highly painful and people like to tell you that you are wrong. I turned cautious on the market early this year and, after much criticism, wrote a post detailing my reasons on May 18, 2015 (see Why I am bearish (and what would change my mind)).

It seems that I am undergoing a mirror image of that experience now. Today, sentiment is showing a crowded short across many measures and it would only take a positive catalyst for the market to melt up. But what might that catalyst be?

The answer might lie in a cyclical upturn. A clue came from David Rosenberg who pointed out that the American consumer could ride to the rescue yet once again (via Business Insider):

Yes, we hear constantly about how China’s share of global GDP has risen inexorably over the decades, but that obscures a huge point.

China’s contribution to global producers has been in the basic material sphere as the country absorbed so much of the world’s resources in its quest to build mega cities and build a world-class industrial infrastructure, but that is about it.

The reliable buyer of last resort, outside resources, was never China. It was and continues to be the United States.

The American consumer, if it were a country of its own, would be the largest economic base in the world. That’s right — even bigger than China’s entire economy. 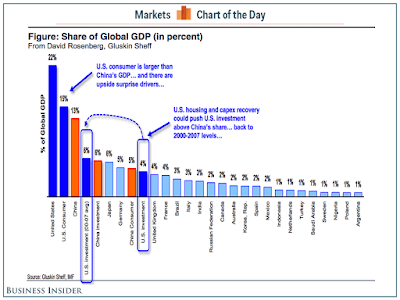 A glance at the relative performance of Consumer Discretionary (NYSEARCA:XLY) stocks show that they are on fire. Homebuilders (NYSEARCA:XHB) are surging on a relative basis. Does this look like the signs of a slowing US economy? 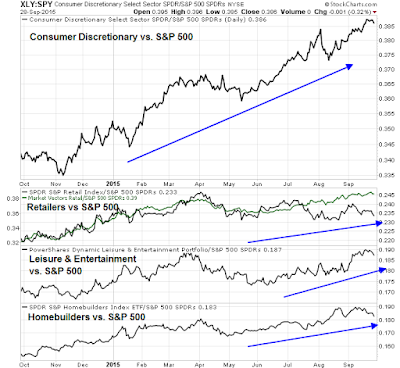 As for China, I have pointed out before that stress levels in the Chinese economy are falling. In particular, Chinese property prices in Tier 1 and 2 cities are turning up again. Don`t forget that most of the leverage in their financial system is in real estate  (via Callum Thomas): 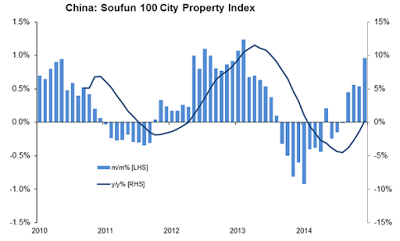 Should China stabilize, we may see commodity (NYSEARCA:DBC) prices bottom and start to turn around – and that would also alleviate much of the angst in the emerging market economies. Jim Paulsen of Wells Capital Management recently postulated such a turnaround and indicated that commodity prices have historically slowed in mid-cycle in the past:

As we examined in an earlier research note (see the Economic and Market Perspective from August 25, 2015), a significant collapse in commodity prices during the middle of an economic recovery is actually quite common. Chart 1 shows the S&P GSCI Spot Commodity Price Index since 1970. The collapse in commodity prices since last summer is similar to past recoveries and like then, it does not suggest economic growth is about to slow.

Although most believe oil prices (and overall commodity prices) are continuing to collapse, chart 2 suggest they have been in a bottoming process since early this year. While the spot price of WTI crude oil did collapse last year, it is currently about $45, a level it first reached in mid-January. We suspect the commodity markets are about to embark on a multi-year advance which will likely alter leadership in the economy and in the stock market.

Right now, market psychology is overwhelmingly negative and I have no idea what would turn it around. However, with an oversold market with traders at a crowded short, should evidence emerge of a nascent cyclical rebound, stock prices would respond by melting up.

I remain wary of pressing any short positions right now. Instead, I would likely be watching for signs of a capitulation low to add to my long posiition.