I don’t know if you saw the news last week, but on October 5, ExxonMobil got dethroned as America’s energy king.

Under normal circumstances that would be impressive enough. As recently as 2013, ExxonMobil was the most valuable publicly traded company (of any kind) on the entire planet.

So it losing the crown as the most valuable publicly traded energy(NYSEARCA:XLE) company was pretty impressive.

Heavy Green Is the Head that Wears the Crown

That’s because it was a renewable energy company that claimed the American energy sector throne.

NextEra Energy (NYSE: NEE) briefly traded at a market cap above that of ExxonMobil on October 5. And then, after a brief rest where shares cooled off and the market cap slipped back under ExxonMobil’s, it took off again and cemented its place at the top.

As I’m writing this article, NextEra has a market cap of over $150 billion, while ExxonMobil is sitting a few billion lower at $146 billion. 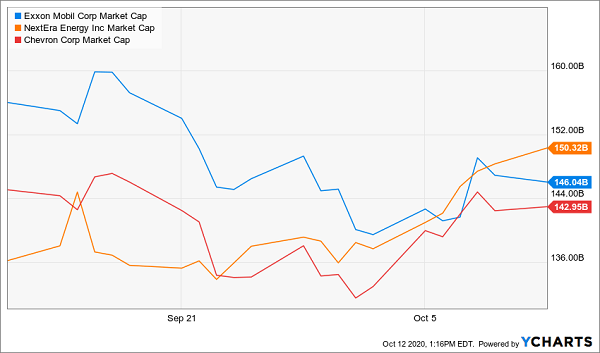 Now, that may not seem incredibly impressive since green energy has been around for so long, but it really should be.

It’s confirmation that the push for renewable energy sources isn’t some fad that will fade. And not only is it here to stay, but it’s already dethroning the former leaders (who’ve held those spots for nearly a century).

It’s vindication for those of us who’ve been championing green energy and recommending investments in companies that help us break our dependence on fossil fuels.

But it also presents a crossroads for investors. Who do you invest in? How do you know what companies will be the next to take over the energy market from the incumbents?

Honestly, I’d love to tell you, but I’d only be guessing. Maybe my guess is a little more well-researched than that of others, but it’s still just a guess.

But I wouldn’t be doing my job if I didn’t try to give you a way to profit from the continued growth of the renewable energy market.

So, to avoid guessing wrong, I’m going to give you a way to make guaranteed money no matter which company is the next to rise to renewable greatness…

You’ve no doubt heard of the retirement funds in the state of California — CalPERS, CalSTRS, CalSavers, etc.

They’re some of the biggest of their kind in the world. They’re so big, in fact, they got their very own team when I was at Morgan Stanley.

But they’re not the only game in town. In fact, there’s one other game, in particular, that’s even bigger than all of them.

And the best part about it is that, unlike the other retirement funds, you don’t even have to live in California to take advantage of it.

We call it the “California Retirement Plan,” not because it’s only available in California, but because that’s where this type of program started… all the way back in the early 1980s.

And it was so popular and so successful that it’s now available in every state in the U.S. and even in some other countries.

We like to say that it’s a guaranteed way to earn steady income “every time the wind blows and the sun shines.”

And it really is an incredible program — and incredibly profitable to boot.

Starting at the Beginning

Before I get into the details of how you can get involved and start collecting annual income payments of $43,500 or more year in and year out, let me give you a little history lesson on how this program got its start.

In 1981, a company showed up in California hoping to harness the power of the strong winds that blow through the Altamont Pass. The problem was that the company didn’t have enough money to get its operations up and running.

So, it reached out to the inhabitants of the surrounding towns and asked for a “loan,” but the terms of this loan were anything but normal.

The company was offering the townspeople (mostly ranchers and farmers) a piece of the future profits the company hoped to make.

“You give us money now and we’ll give you a fraction of every dollar we make from our new facility.”

It sounded like it could be a great deal, so many of the folks living around Altamont Pass decided to give it a shot. And every year after the first “loan,” they received larger and larger payouts.

Those payouts grew large enough to help get them through droughts when no plants would grow in their fields and busts in the cattle markets when they could barely hope to sell even half of the cattle they’d spent those years raising.

And as others saw the success of this “program,” more investors and more companies wanted to get on board.

Fast-forward a few decades and now programs like this are available all over the world. And they all started in the sleepy little farming towns of the Southern California foothills.