Let’s update our pattern recognition skills and plan the future – if the pattern continues as it has done. 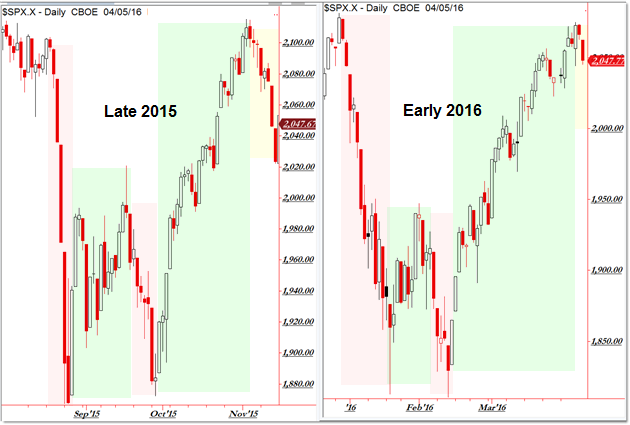 As I’ve been highlighting repeatedly and joyfully to Afraid to Trade Members, the market is playing out a “Repeat Pattern” like that of late 2015.

In simple terms, the pattern begins with a large down-swing (collapse), progresses to a “Dead Cat Bounce” rally, moves to a retest of the prior low, and then bursts into a huge, multi-week rally.

We’ve used this pattern as our template ever since the January collapse and the successful “Dead Cat Bounce.”

All has played out nicely in the “Price Pathway” from the pattern.

IF history repeats and IF the pattern continues to guide the market, THEN the next likely swing in the pattern will again be a retracement to the downside.

Whatever other analysis or indicators you’re using, note the pattern, use it as a template, and adapt to the future which could be yet another pullback away from resistance as a potential fifth phase in the pattern begins.