The latest Conference Board Leading Economic Index (LEI) for October was up 0.7% from the September final figure of 107.5. Investing.com predicted a 0.7% increase.

Here’s an excerpt from the technical notes.

The Conference Board LEI for the U.S. increased in October. Positive contributions from most components helped offset weakness from housing permits(NYSEARCA:XHB) and consumers(NYSEARCA:XLY) outlook on economic conditions. In the six-month period ending October 2020, the leading economic index increased 11.7 percent (about a 24.7 percent annual rate), a reversal from its negative growth of 13.0 percent (about a -24.3 percent annual rate) during the previous six months. In addition, the strengths among the leading indicators have become more widespread than the weaknesses.

The Conference Board CEI for the U.S., a measure of current economic activity, also increased in October. The coincident economic index rose 10.4 percent (about a 21.9 percent annual rate) between April and October 2020, a reversal from its decline of 12.9 percent (about a -24.2 percent annual rate) over the previous six months. In addition, the strengths among the coincident indicators have become very widespread, with all components advancing over the past six months. The lagging economicindex continued to increase, but at a much slower rate than the CEI. As a result, the coincident-to-lagging ratio continues to increase. Real GDP expanded at a 33.1 percent annual rate in the third quarter, after contracting 31.4 percent (annual rate) in the second quarter.

Here is a log-scale chart of the LEI series with documented recessions as identified by the NBER. The use of a log scale gives us a better sense of the relative sizes of peaks and troughs than a more conventional linear scale. 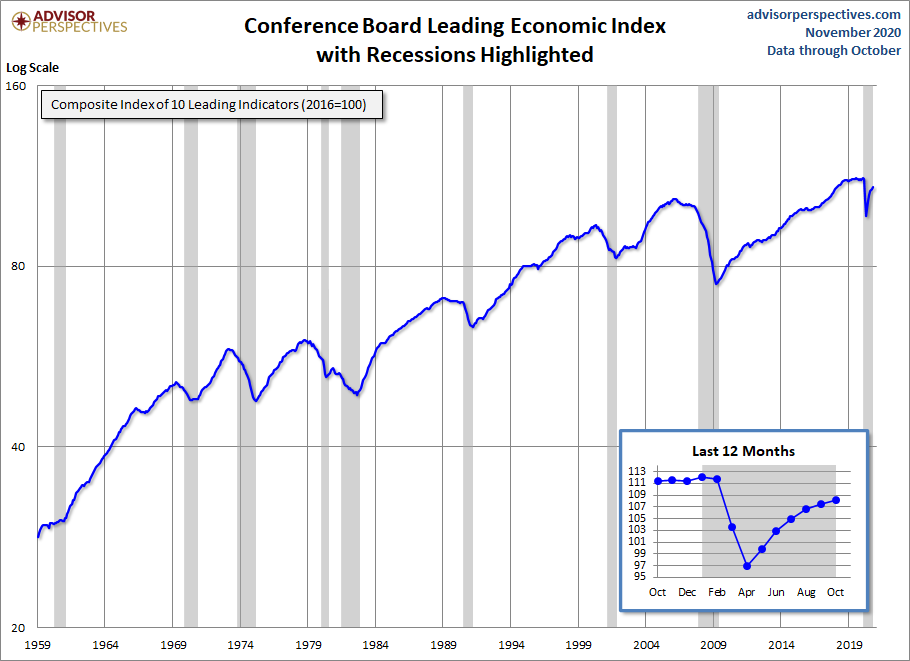 For additional perspective on this indicator, see the latest press release, which includes this overview:

“The US LEI rose again in October, with widespread improvements despite weakness from housing permits and consumers’ outlook on economic conditions. However, the leading index has been decelerating in recent months, which suggests growth will moderate significantly in the final months of 2020, slowing down from the unusually rapid pace in Q3,” said Ataman Ozyildirim, Senior Director of Economic Research at The Conference Board. “Furthermore, downside risks to growth from a second wave of COVID-19 and high unemployment persist. While The Conference Board projects the US economy will expand in Q4, the pace of growth is unlikely to exceed 2.2 percent (annual rate).” 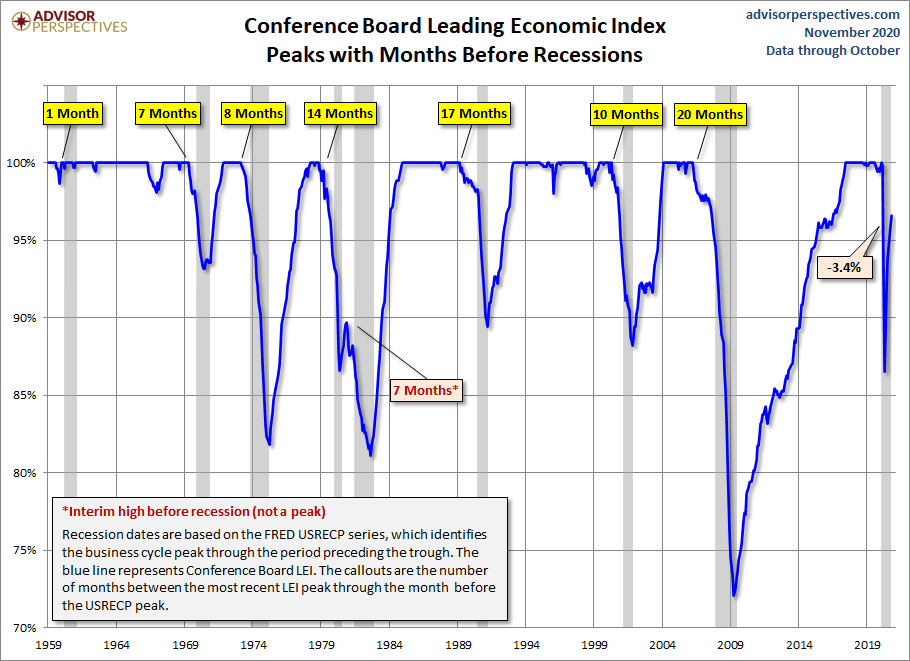 LEI and Its Six-Month Smoothed Rate of Change

Based on suggestions from Neile Wolfe of Wells Fargo Advisors and Dwaine Van Vuuren of RecessionAlert, we can tighten the recession lead times for this indicator by plotting a smoothed six-month rate of change to further enhance our use of the Conference Board’s LEI as a gauge of recession risk. 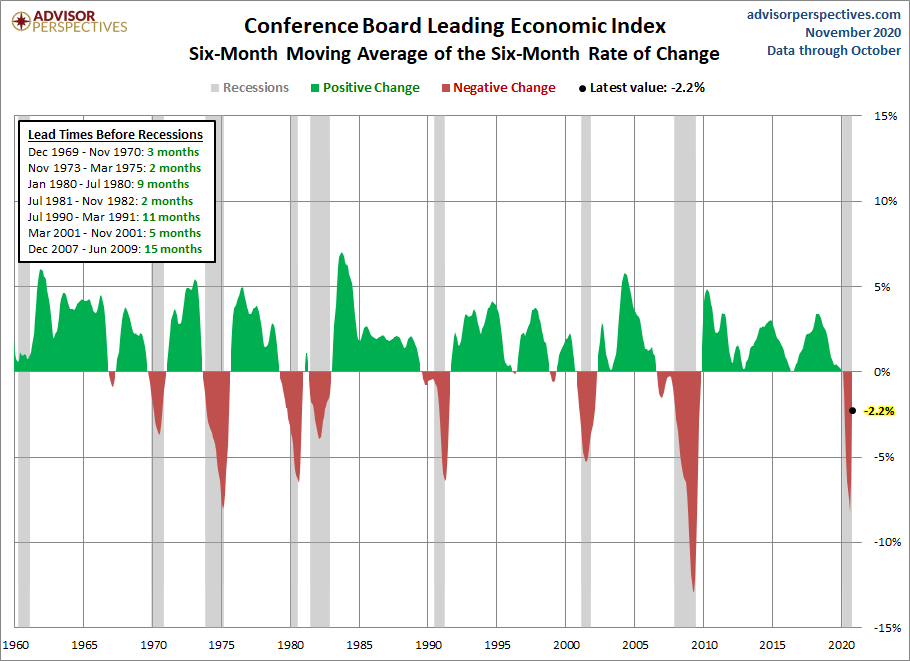 As we can see, the LEI has historically dropped below its six-month moving average anywhere between 2 to 15 months before a recession. Here is a twelve-month smoothed out version, which further eliminates the whipsaws: 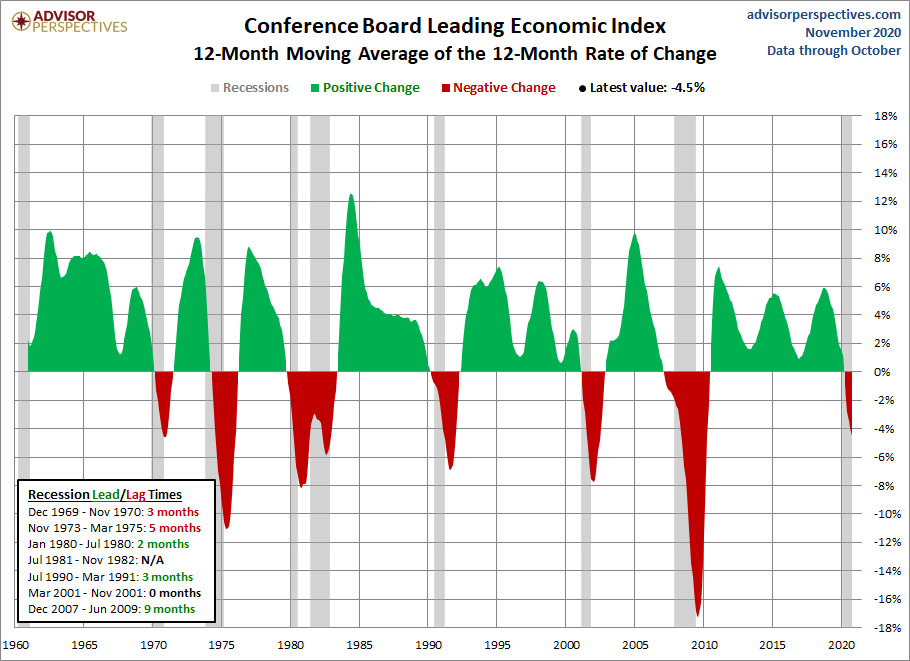 The Conference Board also includes its Coincident Economic Index (CEI) in each release. It measures current economic activity and is made up of four components: nonagricultural payroll, personal income less transfer payments, manufacturing and trade sales, and industrial production. Based on observations, when the LEI begins to decline, the CEI is still rising. Here’s a chart including both the CEI and LEI. 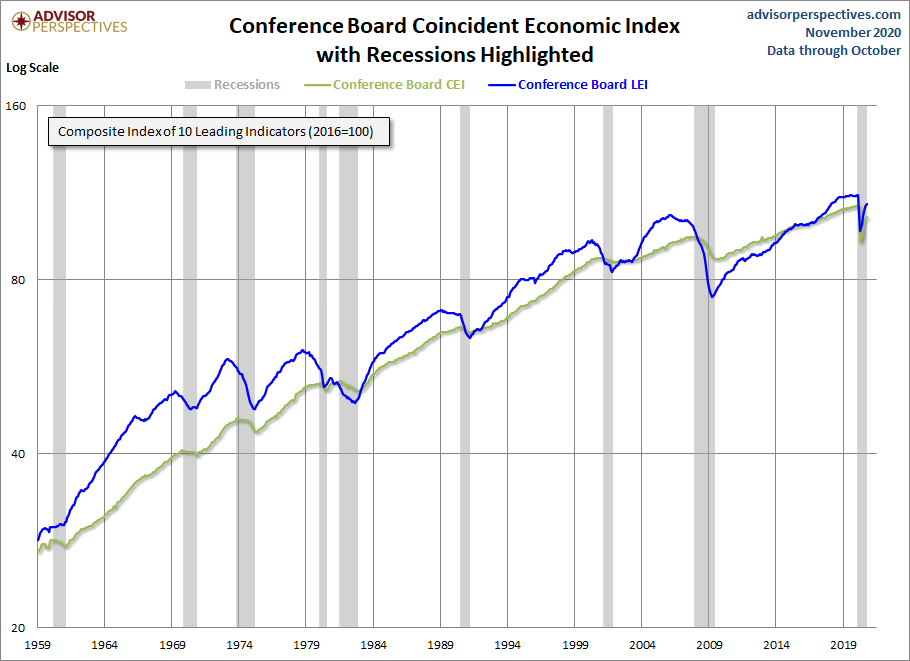 Here is a chart of the LEI/CEI ratio, which has also been a leading indicator of recessions. 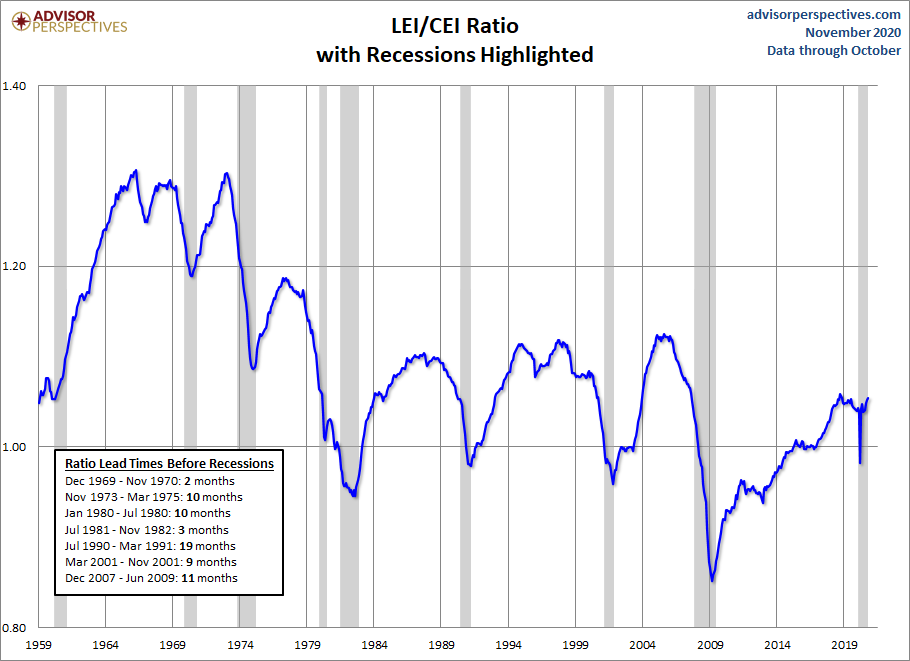