Stocks Are Weak and Downtrending

That quote is certainly true for “weak getting weaker” downtrending Twitter (NYSE:TWTR) as price broke to a fresh new 52-week low this morning. 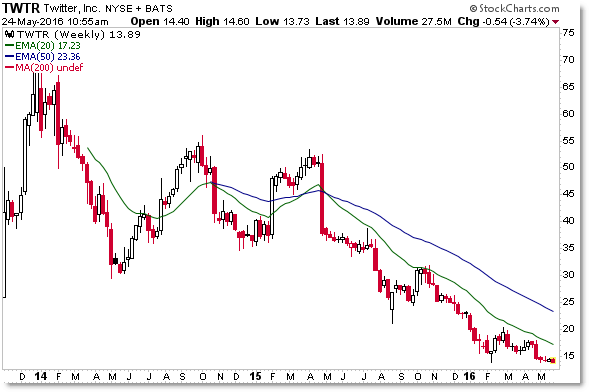 The Happy Days for Twitter were early in 2014 as price began a stellar and long-term downtrend.

From $75.00, price journeyed lower, supporting at the $35.00 level before breaking lower and resuming the downtrend in mid-2015.

Similarly, share prices stalled above $15.00 into 2016 but now may be breaking into a new sell-swing.

Here’s the Daily Chart and breakdown to new lows, keeping the downtrend going: 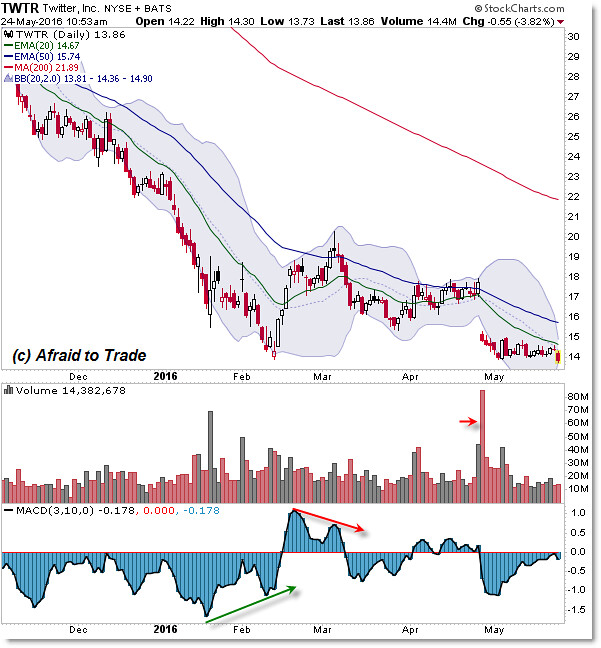 We define a downtrend as a “series of lower swing lows and lower swing highs” along with a “bearish orientation in the moving average.”

As I frequently highlight, we only trade in the direction of established trends and DO NOT look to fight or fade trends (we’re not reversal traders here).

Twitter is a good example of our “weak stocks tend to get even weaker” concept of swing trading.

A strong surge higher in February off $14.00 led to an aggressive rally higher but the trend continued through March into May.

We’re seeing a breakdown to a new 52-week low this morning, and if sellers keep up the pressure, Twitter (TWTR) shares are likely to continue even lower.

Be on guard for a possible “Bear Trap” like the example I highlighted for you in “Apple – Trapple.”