Note: This commentary has been updated with the latest numbers from last Friday’s Employment Report.

The Labor Force Participation Rate (LFPR) is a simple computation: You take the Civilian Labor Force (people age 16 and over employed or seeking employment) and divide it by the Civilian Noninstitutional Population (those 16 and over not in the military and or committed to an institution). The result is the participation rate expressed as a percent.

The first chart below splits up the LFPR since 1948 in two ways: by age and by gender. For the former, have the 25-64 age cohorts to represent what we traditionally think of as the “productive” (pre-retirement age) workforce. The BLS has data for ages 16 and over, but the historical trend toward college attendance has been quite dramatic over this timeframe. So let’s use age 25 as the lower boundary to reduce the college-years skew. 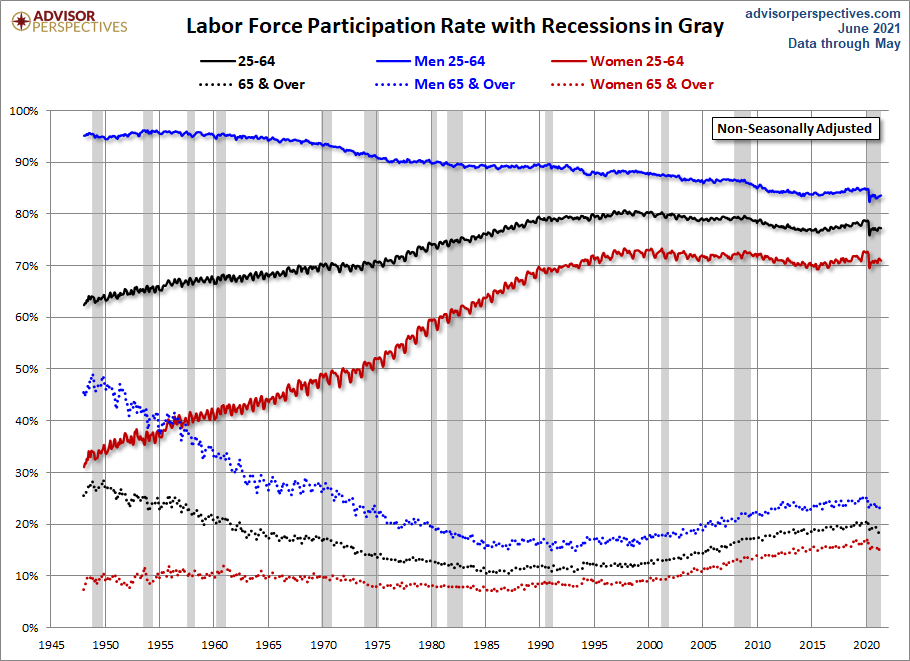 The next chart eliminates the squiggles with a simple but effective seasonal adjustment suitable for long timeframes, a 12-month moving average. There are some callouts to quantify the data in 1948 and the present. 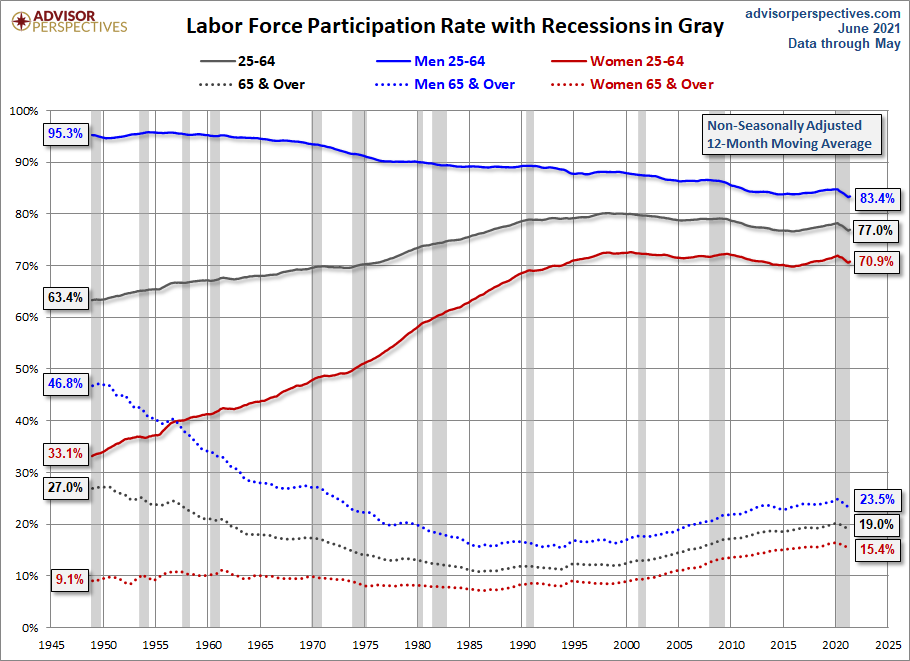 It doesn’t take a Ph.D. in sociology to recognize some significant changes in the chart above. The growth of women in the workplace, the solid red line, was a major trend. The financial advantage of the two-income household was boosted by Title VII of the Civil Rights Act of 1964, which prohibits discrimination by race, color, religion, sex, or national origin. The Age Discrimination in Employment Act of 1967 helped to stabilize the decline in the 65 and over participation rate, at least until the 11-month recession that started in December 1969.

The dotted lines representing ages 65 and over also illustrate some dramatic changes. A vision of the good life in retirement, assisted by a burgeoning Social Security system, was a standard expectation for pre-Boomer generations. The advent of Medicare in 1965 and Social Security COLAs (cost-of-living adjustments) in 1975 added to their confidence in the Golden Years.

However, the LFPR for the “elderly” flattened out in the mid-1980s and then began increasing — slowly at first and more significantly around the turn of the century, as the numbers for the productive cohort continued to decline. The next chart gives us a clearer look at the relative patterns of growth and contraction since 2000. 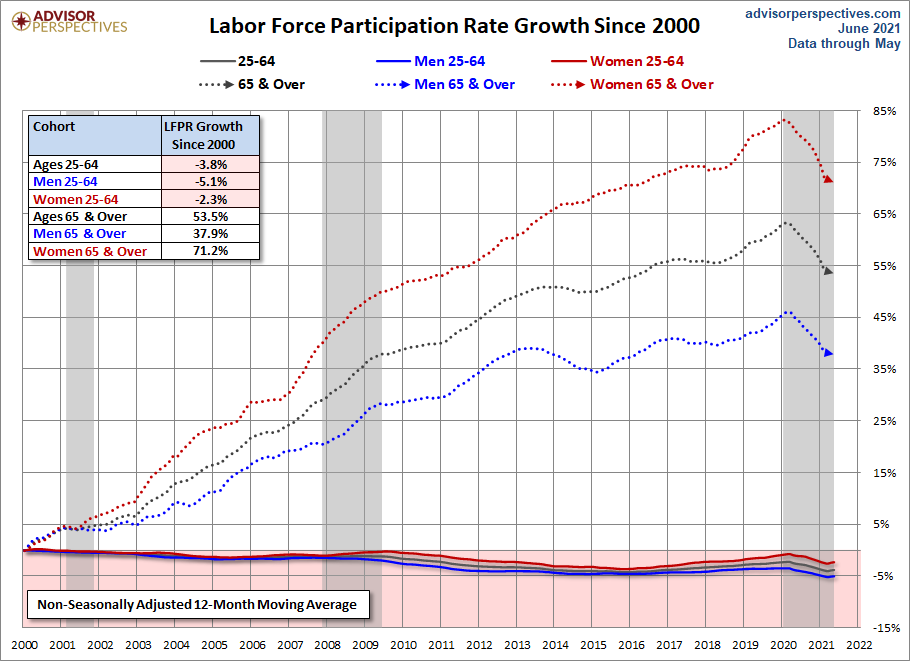 Since January 2000, the participation rate for all the elderly has soared by 53.5 percent and for elderly women by 71.2 percent.

The next chart shows the data for six age cohorts since 2000 with no gender distinction. Two recessions and two savage market selloffs were drivers of the trends we see here. For this close-up, we see the BLS’s seasonally adjusted data for the four cohorts ranging in age from 16-54, but only non-seasonally adjusted data is available for the two older cohorts, which accounts for the more noticeable squiggles. 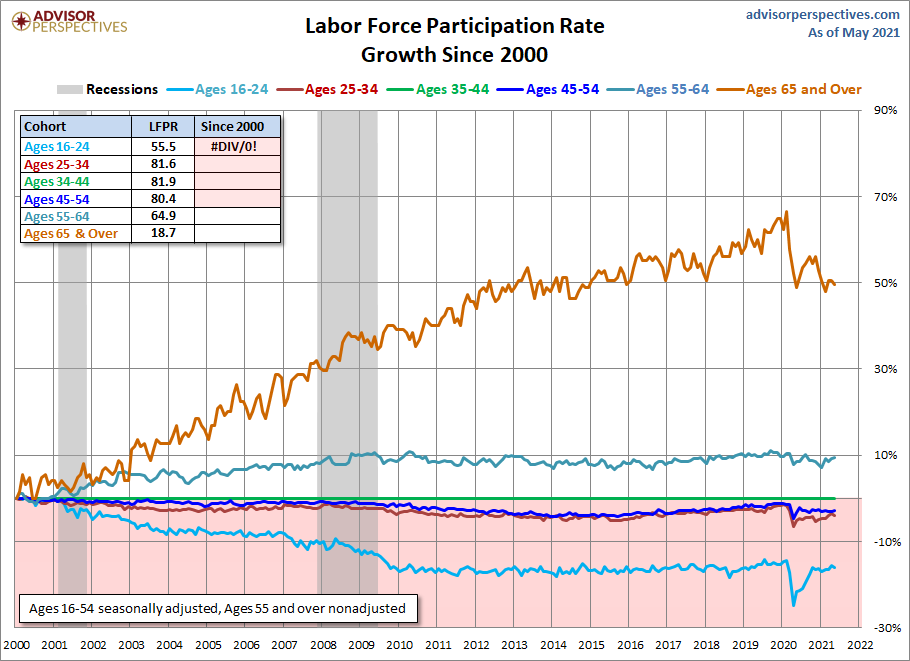 For an apples-to-apples comparison, here is the non-seasonally adjusted data for all six cohorts smoothed with 12-month moving averages. 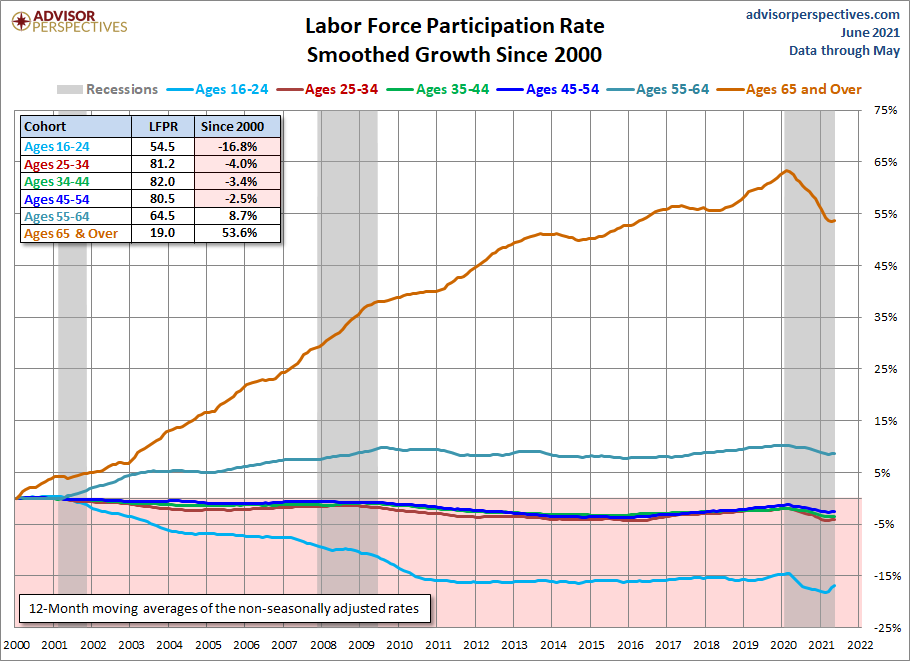 Another interesting, if less conspicuous, line in the chart of the six age cohorts above is the blue one, representing ages 45-54. Household income data tells us that historically this age bracket constitutes the peak earning years. For more on this topic, see this commentary.

While the LFPR growth for the elderly is the most striking feature in the chart above, we also see a noticeable decline in the youngest cohort. A significant driver of this trend has been the decision to stay in (or go back to) school for more education. Supporting evidence is found in the eye-popping growth of student loan debt, especially since the onset of the Great Recession. To be sure, some of that trend is accounted for by older cohorts heading back to school in hopes of improving their employment prospects. 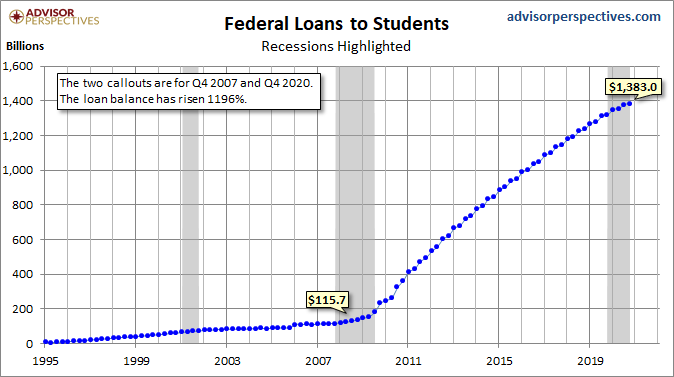 Note: The Q4 2020 data point in the chart above is the most recent.

Let’s close this retrospective with a pair of pie charts based on annual data for the Civilian Labor Force (as opposed to the LFPR) to illustrate the change in the six cohorts from 2000 to 2020.

For some simple math: In 2000, the three younger cohorts constituted 66% of the labor force. Now they have shrunk to 56%, which means the 45 and older workers have grown from 34% to 44% of the labor force. In the late 1990s, the dream of early retirement was common among the Boomers. But the reality is that an increasing number are delaying retirement and many who did retire have now re-entered the workforce.

There is little doubt that the two 20th century recessions and major market selloffs devastated the retirement plans for a great many of the individuals nearing that milestone.