We’ve updated our monthly workforce analysis to include the latest Employment Report for August.

The unemployment rate dropped to 5.2%, and the number of new nonfarm jobs (a relatively volatile number subject to extensive revisions) came in at 235K.

The closely watched headline unemployment rate is a calculation of the percentage of the Civilian Labor Force, age 16 and older, that is currently unemployed. Let’s put this metric into its historical context. The first chart below illustrates this monthly data point since 1990.

In the latest report, this indicator inched up to 5.2%. The age 16+ population increased by 142 thousand and the labor force increased by 190 thousand. The breakdown of the growth is an increase of 509K employed and a 318K decrease in the unemployed. 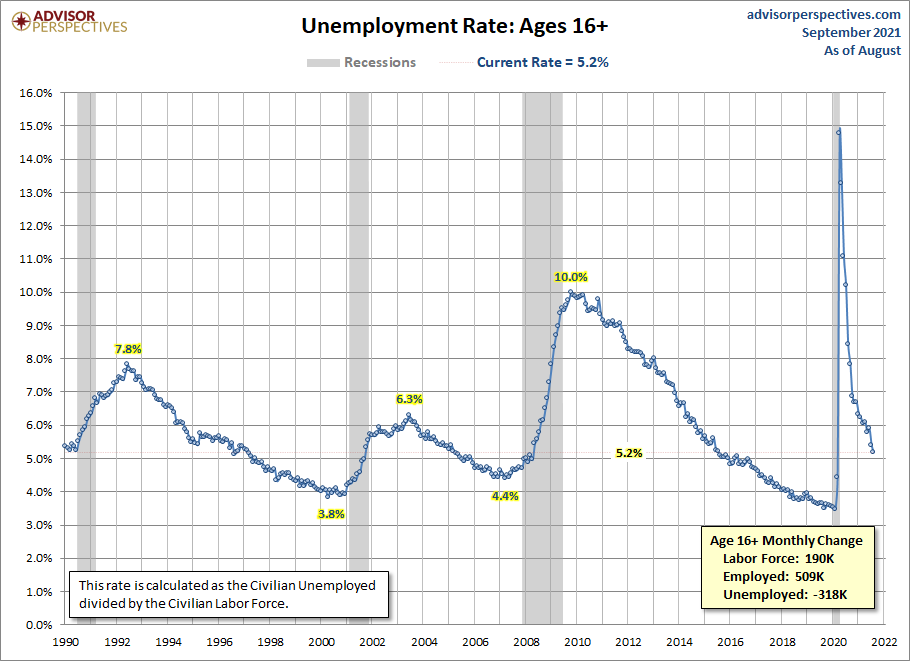 Unemployment in the Prime Age Group

Let’s look at the same statistic for the core workforce, ages 25-54. This cohort leaves out the employment volatility of the high-school and college years, the lower employment of the retirement years and also the age 55-64 decade when many in the workforce begin transitioning to retirement … for example, two-income households that downsize into one-income households.

In the latest report, this indicator is at 4.7% (to one decimal place), unchanged from the previous month. The cohort population decreased by 34 thousand and the labor force decreased by 50 thousand. The breakdown of the growth is an increase of 158K employed and a 207K decrease in the unemployed. 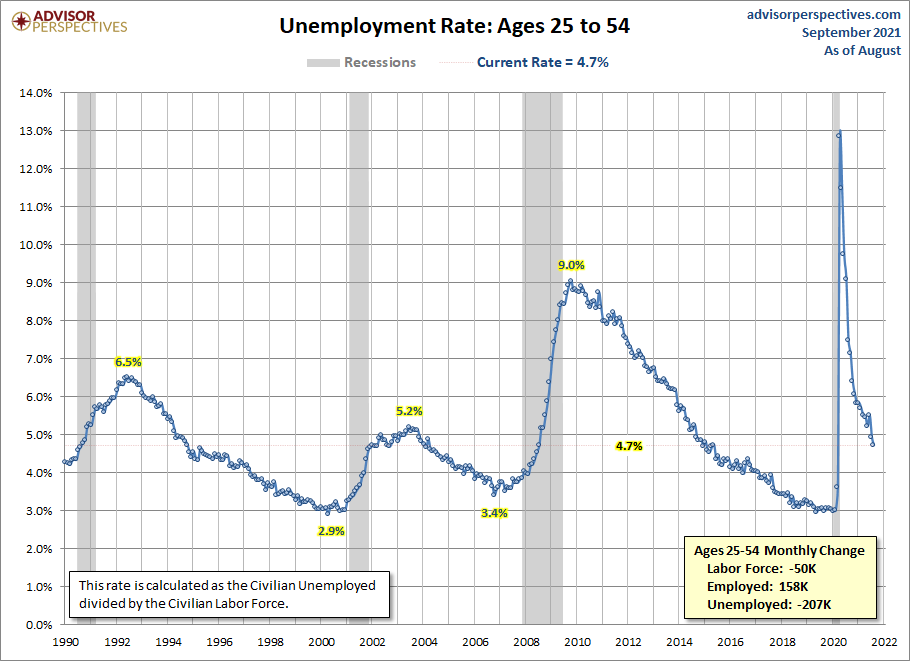 A wildcard in the two snapshots above is the volatility of the Civilian Labor Force — most notably the subset of people who move in and out of the workforce for various reasons, not least of which is discouragement during business cycle downturns. The chart below continues to focus on our 25-54 core cohort with a broader measure: The Labor Force Participation Rate (LFPR). The LFPR is calculated as the Civilian Labor Force divided by the Civilian Noninstitutional Population (i.e., not in the military or institutionalized). Because of the extreme volatility of the metric, our focus is the 12-month moving average.

Based on the moving average, today’s age 25-54 cohort would require 2.3 million additional people in the labor force to match its interim peak participation rate in 2008 and 3.6 million to match the peak rate around the turn of the century. 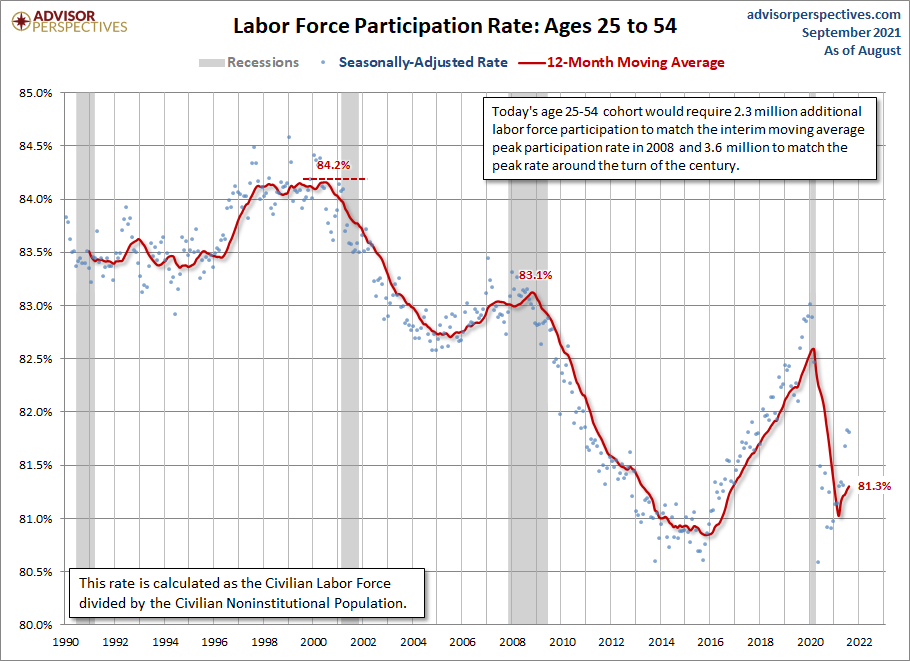 Why are so many labor force participants needed for a complete LFPR recovery? When the economy is moving at full speed, as in the late 1990s, jobs are abundant, which encourages the population on the workforce sidelines to join the ranks of the employed.

The next chart below is calculated as the Civilian Employed divided by the Civilian Noninstitutional Population. Again our focus is the 12-month moving average. A significant feature of the Employment-to-Population Ratio is that it isn’t affected by the volatility of labor force participants who, for various reasons, are unemployed.

This metric began to rebound from its post-recession trough in late 2012 and surpassed its moving average ratio peak in 2007. However, as a result of the COVID-19 pandemic, the current age 25-54 cohort would require a 6.2 million participant increase to match its mid-2000 peak. 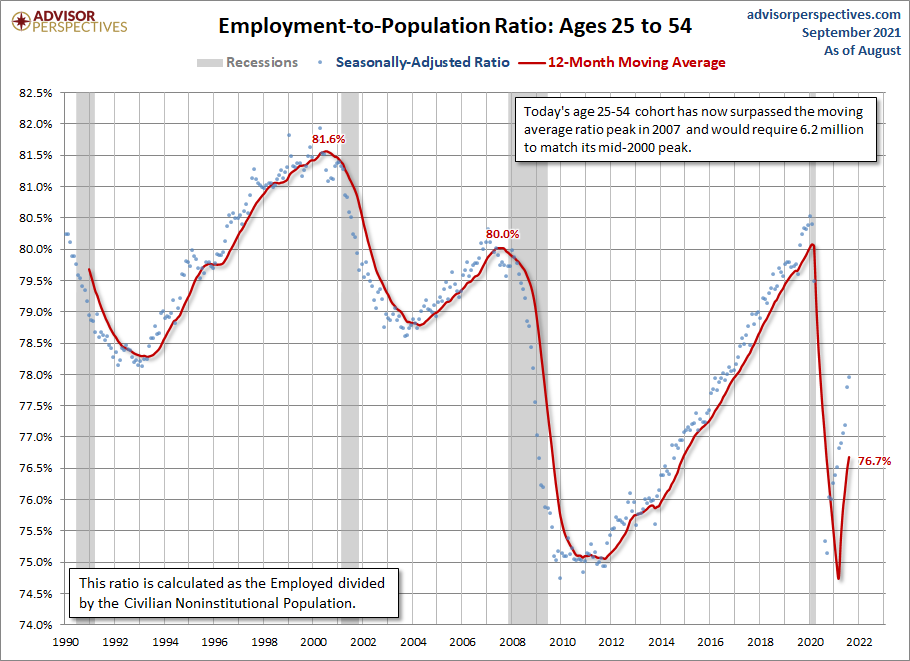 A Structural Change in the Economy

The charts above offer strong evidence that our economy is in the midst of a massive structural change. Two of the three mainstream employment statistics — labor force participation and employment-to-population — document a structural change that seems deeper than just the result of a business cycle downturn. Unemployment has essentially reached its “natural” rate, but labor force participation and employment-to-population are both very low compared with other post-recession periods.

In order to discount the general belief that the aging of the baby boom generation is a major factor in weak employment, we’ve focused on the 25-54 age group. Also, by excluding the age 55-64 decade associated with early or pre-retirement, we’ve eliminated a cohort that might include a major source of discouraged or less-determined workers.

The Growth of the Elderly Workforce

Let’s close this analysis with a chart that essentially demolishes the prevailing view of our aging population as a demographic drag on labor supply. Here is the ratio of the 65-and-over cohort as a percent of the employed civilian population all the way back to 1948, the earliest year of government employment data. Mind you … these people are not only in the workforce but also actually employed. 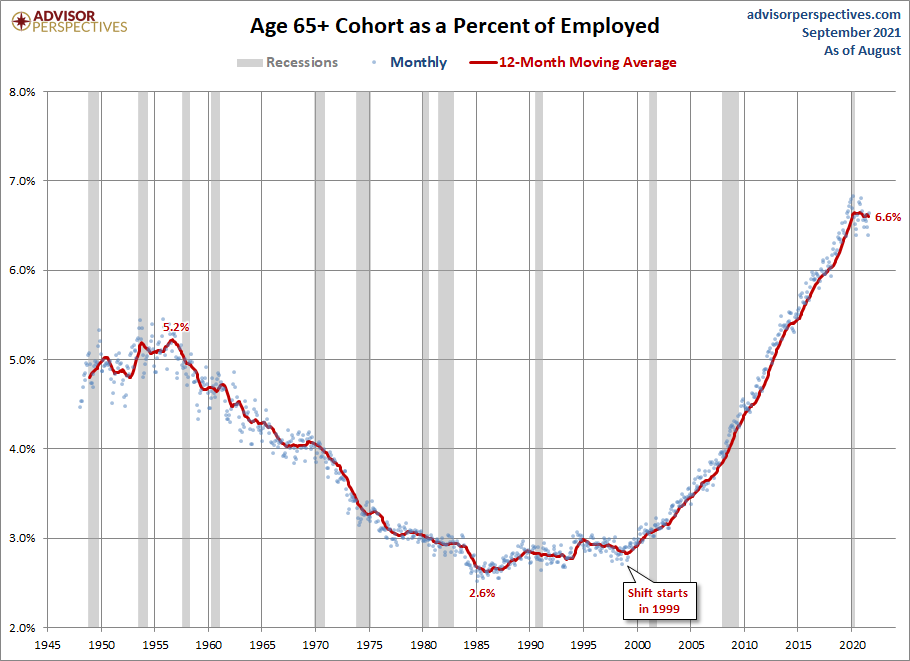 The 12-month moving average of elderly employment is at its historic high of 6.6% — now over double its low in the mid-1980s. This is a trend with multiple root causes, most notably longer lifespans, the decline in private sector pensions and frequent cases of insufficient financial planning. Another major factor is the often surprising discovery by many of the elderly that, financial consideration aside, the “golden years of retirement” are less personally satisfying than productive employment. Note that the growth acceleration began in the late 1990s, prior to the last two business cycle downturns (aka “recessions”).

This structural change in employment continues to have a major impact on the overall economy and this change has been exacerbated by the Great Recession and could have an even greater impact as a result of the current recession.