We’ve seen so many headlines recently about China, its economy, and how it pulled down the stock market last week.

Let’s step back and chart China with the ETF symbol FXI to see what’s happened and what’s important now. 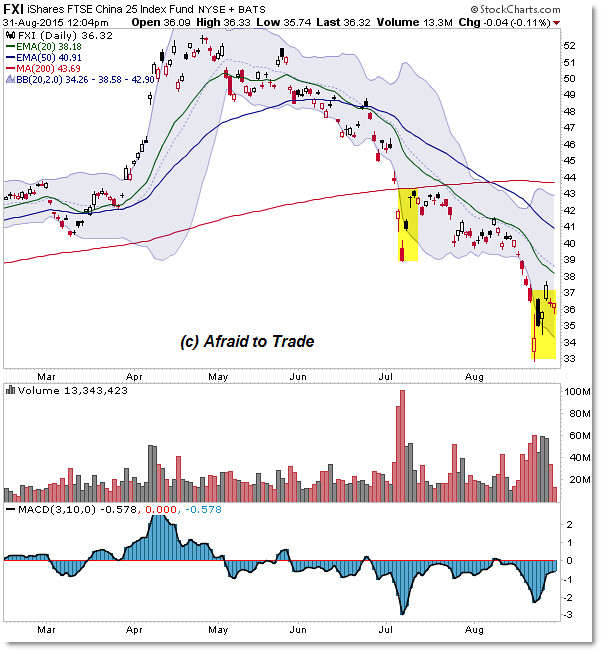 2015 has been a volatile year for the Chinese stock market, as seen with the tradable ETF FXI(NYSEARCA:FXI).

First, the fund had a strong bullish gap and breakout – on higher volume – going into April.

At that point, price retraced lower, then later broke the support of the 50 day EMA into the $48.00 zone.

From there, the selling intensified on very high volume – up to 100 million shares in a day – in July.

From there, price stabilized at the $40.00 level before crashing again, this time on lower volume in August.

This “August Crash” is credited for sending the US Stock Market rapidly lower.I also highlighted what happened during the July ‘crash’ which is happening again during this August move.

Shares bounce strongly higher back into the underside of the falling 20 day EMA.

Let’s actually broaden our perspective to the Weekly Chart to pinpoint the key levels at play now: 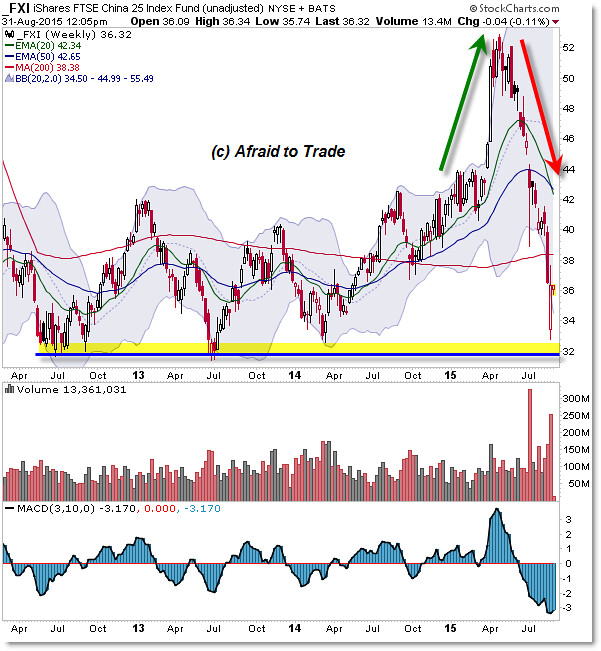 Going back in time, we see the FXI fund created a triple support shelf at the $32.00 per share level.

Finally, the fund broke strongly higher in early 2015, overheating above $52.00 per share.

The result was just a “Return to Earth” from a Rocket Arc Pattern – a V-Spike Reversal at the highs.

Speaking of the Rocket Arc, be sure to review my post from China’s FXI Rocket Arc as it occurred.

Price collapsed down from $52.00 toward the $32.00 key support pivot which is where we trade now.

If shares fail to bounce and suddenly break under $32.00, it would indeed shift the chart and expectations toward even more selling pressure under $32.00.